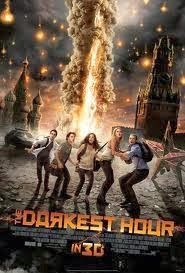 Pros: action interspersed with reflection, set in Moscow, humans all work together after the attack despite nationalities, interesting alien design and premise, good special effects

Four Americans and a Swede visiting Moscow band together after an invasion of invisible aliens wipes out the city.

Once you get past the scientific impossibilities (which, if you're not scientifically inclined you may not even notice are present - my husband had to explain them to me later), this movie takes the best elements of Cloverfield and joins them with 28 Days Later.  You see the aliens land and watch a terrifying first contact, after which the protagonists hole up for a few days.  When they emerge, they must deal with the wreckage of a decimated Moscow.

There's no shaky cam footage and tension is increased by occasional quiet moments when the full extent of the invasion is considered, the director's willingness to kill off characters and the 'early warning' system the characters devise.  The characters themselves, while not particularly likable are more 'everyman' than irritating targets you're cheering the aliens on to kill.  Having said that, only one death made an impact on me emotionally.

It was great to see Russian actors playing the Russian characters, and an invasion movie that doesn't take place in the US (or Japan, for that matter).  Moscow was a fun location, and seeing the Americans and Russians work together without 'we're better than you' posturing was a real treat.

The special effects were well done and the alien design original.  The premise behind the aliens themselves was quite clever.  And there's a real beauty to the falling alien craft at the beginning of the film, bringing to mind the meteor shower in The Day of the Triffids.

The movie has a surprisingly upbeat ending.  It was a little contrived, but ultimately showed humanity at its best, willing to fight for their planet.

Ultimately, it's a fun way to waste a few hours.

Email ThisBlogThis!Share to TwitterShare to FacebookShare to Pinterest
Posted by Jessica Strider at 12:48