Book Review: When She Woke by Hillary Jordan 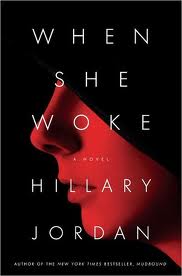 Hannah Payne has been sentenced to 16 years as a Chrome.  Her skin has been turned a rich, vibrant red in order to denote her crime of murder, for aborting her child.  The scourge that killed many and made women infertile has been cured and the Sanctity Of Life laws mark women like Hannah as outcasts.  Her fundamentalist Christian upbringing did not prepare her for forbidden love with a married man or the horrors she would face as a Red.  When She Woke is Hannah's story of endurance, enlightenment and ultimately self-empowerment.

As with many dystopian novels, When She Woke is terrifying because in may ways it's easy to see this future coming about.  In the book Roe v. Wade is overturned in order to help increase the population, an act some parties in the US are already trying to do, removing women's rights to control their own bodies and their bodies' reproduction.  The idea of tracking released criminals is also one close to being realized, with the jump to making such a database open to the public only a small step further.

While based on Nathanial Hawthorne's The Scarlet Letter, When She Woke is much darker.  While she faces the reproach and repudiation of Christians, she also faces the lechery of those who would take advantage of the downtrodden, and a fundamentalist group the equivalent of the KKK, that targets and kills Chromes.

The book was therefore unsettling on a number of levels.  It reads as though it will have an unpleasant and depressing ending, yet at some point Hannah stops letting others decide her path and takes control of her own life.  It's amazing seeing her go from a cowed if outspoken Christian girl to a fully liberated woman who questions the truth and motivations of others.  One who knows the consequences of her actions and is willing to face them instead of trying to please others and their notions of repentance.  Her character changes so completely - yet so honestly - as the book progresses that when you reach the end it's hard to remember who she was at the beginning of the book.

Not for the faint of heart, this is a good thought-provoking read about personal rights, the justice system and being your own person.
Email ThisBlogThis!Share to TwitterShare to FacebookShare to Pinterest
Posted by Jessica Strider at 09:25