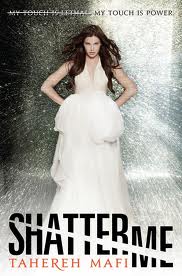 Cons: some plot twists depended on remarkably good luck/coincidence, ending implies Juliette made a choice she didn't actually make (yet)

For Parents: some sexual content (kissing +, but no actual sex), some language, some violence

Seventeen year old Juliette can't touch people without causing them pain and ultimately killing them.  Three years ago she forgot this truth and had an accident that still haunts her and sent her to solitary confinement at an insane asylum.

Her hellish life changes when she's given a cellmate, a boy named Adam who looks familiar.

This is a book about power, control and sanity.  Juliette is surprisingly strong for a woman who's close to losing her sanity due to this power she cannot control.  When she comes under the power of the clearly insane Warner, who wants to use her ability to torture and kill those who defy the Reestablishment, the new global world order, she has to make some tough decisions.

Mafi's dystopic world is horrific, one in which people have given up what freedoms remained to them after the plants and animals became so polluted that eating them meant poisoning themselves.  The Reestablishment promised hope, but delivered a totalitarian regime in which a few live in luxury while the rest suffer.

The writing is brilliant.  Like with Patrick Ness's The Knife of Never Letting Go, Mafi knows the rules of writing and breaks them in delightful ways.  Each word is chosen with care, as the protagonist makes the most unusual - but intelligent - metaphors.

Juliette is an intriguing character who is immediately sympathetic.  She's never had physical comfort, no hugs, kisses, pats on the back.  Seeing through her eyes, it's hard to understand how she survived so long in a hostile world.  And she's constantly self-censoring her thoughts, crossing out what she's actually thinking and feeling and replacing those thoughts with ones she thinks others will find more acceptable, because she's spent her life trying to be better and do better so that people will love her.

There's a pretty intense love story woven through the book, made challenging because Juliette doesn't believe she's worthy of love, despite her yearning for it.  So the revelation that her suitor can touch her is quite profound, giving her the sensations she's always craved.  While there's a lot of touching and kissing and yearning, there's no actual sex.

This is a quick read as the book is very compelling and hard to put down.  There are some negative points, but you almost pass over them because you want to know what's going to happen next so badly.  A few plot points are accomplished by means of supreme luck with regards to the protagonists.  Some of their escapes happen too easily given the world and their circumstances.  And the ending implied Juliette made a decision that she never actually made (though the implication is that she would make the choice that the book states she already made).

It's an open ended conclusion that begs for sequels.