It's a (thankfully) small list, as my TBR pile is threatening to topple over on the floor and I'd like to get through some more of it before the end of the year. With the exception of The Lost Diaries of John Smith, all quotes are from the Indigo.ca website.  The Lost Diary synopsis is from an email the author sent me.  The novella can be purchased via amazon and smashwords.

I've started rereading A Darkness Forged in Fire, the first in the Iron Elves trilogy, of which Ashes of a Black Frost is the third.  I find Evans' writing to be quick, detailed and like watching TV (ie, a lot of fun, easy to picture and you won't believe how fast the pages turn).  Can't wait to learn how this story ends.

If you haven't read the first two, here's the synopsis for book one:

"In this world, Konowa Swift Dragon, former commander of the Empire's elite Iron Elves, is anything but ordinary. He's murdered a Viceroy, been court-martialed, seen his beloved regiment disbanded, and finally been banished in disgrace to the one place he despises the most-the forest. All he wants is to be left alone with his misery...but for Konowa, nothing is ever that simple."

"The first graphic novel in the Carnal series, Pride of the Lions takes place on the continent of New Africa and focuses on three main species of humanistic animals.

After the Great War decades earlier between the hyenas and the lions, the victorious and once united lion prides now lay scattered across the land, torn by civil unrest over territory disputes and food shortages. The hyena clans that survived the war were forced deep into the Earth and now live in a massive underground city under the control of a terrible witch. The buffalo race is indifferent to most other species and have walled themselves off from the rest of the kingdoms. Humans have lost their hold on the African territories long ago and live as a simple, nomadic species.

The first book opens with Long Eyes, an old sapphire-eyed lion who is determined to save the lion kingdom and rescue his warrior son, Oron, who has gone missing. Long Eyes believes Oron is the key to uniting the prides. A young lioness tracker named Omi is sent out with the protection of two lion brothers to locate the missing warrior, but what they find is something that may unravel the very foundation of life for all species."

"Not so very long ago, Eragon-Shadeslayer, Dragon Rider-was nothing more than a poor farm boy, and his dragon, Saphira, only a blue stone in the forest. Now the fate of an entire civilization rests on their shoulders.

Long months of training and battle have brought victories and hope, but they have also brought heartbreaking loss. And still, the real battle lies ahead: they must confront Galbatorix. When they do, they will have to be strong enough to defeat him. And if they cannot, no one can. There will be no second chances.

The Rider and his dragon have come further than anyone dared to hope. But can they topple the evil king and restore justice to Alagaësia? And if so, at what cost?

This is the much-anticipated, astonishing conclusion to the worldwide bestselling Inheritance cycle." 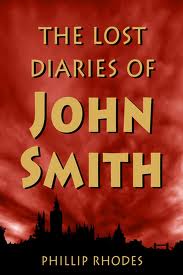 "Imagine our world devastated by aliens as told 20 years after the Event.  The Diaries of John Smith was written by Amy Cooper on an old manual typewriter in 2035.  She was born in 2010 and survived the devastating firestorm that killed countless millions in 2014.  This is her story of living in post-apocalyptic Scotland, which accompanies the lost diaries of the man who saved her life."
Email ThisBlogThis!Share to TwitterShare to FacebookShare to Pinterest
Posted by Jessica Strider at 14:01