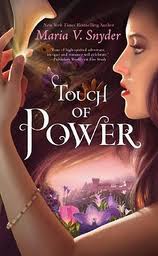 Avry of Kazan is a healer in a post plague world where healers have been hunted and killed for spreading the disease that decimated the populace of the Fifteen Realms.  After three years of hiding, her cover is blown when she heals another child.  Too ill from the aftereffects of the child's illness (which must be taken into herself in order to heal it) for her to run, she's taken by the authorities and sentenced to death.

Kerrick of Alga finds her there, and frees her with the condition that she heal his friend.  But his friend has the plague, and healing it means dying herself.

Touch of Power is reminiscent of Snyder's first novel, Poison Study.  The protagonist is a feisty young woman, the romance creeps up on you towards the end (with many clues, but no acknowledgement until the climax), and fast paced story telling with lots of plot twists to keep you turning pages.

Tragedy didn't make my connect with the characters as I would have liked, until the final scene.  I wanted to feel their losses as well as their joys, and didn't quite get there.

The world was interesting, some aspects (like the events surrounding the plague and the death lilies) were well detailed and others (differences in customs between Realms) were ignored.  In other words, it's a very tight story, with no digressions for elements unconnected to the plot, even if a few side details wouldn't have been amiss.

This somewhat open ended book is a solid beginning to a new trilogy.

Out December 20th.
Email ThisBlogThis!Share to TwitterShare to FacebookShare to Pinterest
Posted by Jessica Strider at 09:01

I enjoyed Poison Study, but then forget all about Synder and have seemingly missed masses in the meantime! I will have to try and catch up