As the first book in your Kingdom of Rolencia series, tell us about The King's Bastard.

I'm a fan of the Spec Fic genre from way back. I used to have a bookshop in my late teens and early twenties and I remember discovering authors and devouring their books. I wanted to write the kind of book that just sweeps you away. Imagine you've worked hard all week, you'd done the washing and the cleaning and it's Saturday afternoon. You want a book you can curl up with and get lost in.

That's what I was trying to create, when I wrote the King Rolen's Kin trilogy. One reader told me the book should come with a warning - Don't start reading at night if you have to get up for work early the next day. LOL. 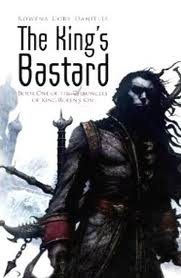 According to your bio page, you've got 6 children and have studied several martial arts. How do you find time to write?

In what ways has studying martial arts helped with your writing?

There's the obvious things like knowing how to do a flying side kick, knowing what it feels like to go up against someone at the national championships. Then there's the less obvious things like immersing oneself in the mindset of the warrior code (Bushido). I spent five years learning Iaido, the art of the Samurai sword. It is a beautiful thing.

Your trilogy is being published in 3 consecutive months. How was that decided?

When the trilogy sold all three books were completed and, when I heard the publishers decided to release them a month apart, I was delighted. As a reader, I hate waiting for the rest of the books in a trilogy.

How do you feel about that fact that American publishers have recently 'discovered' Australian writers?

Have they? I'm way over here in Australia. We've always been here. I have lots of great friends who are really talented writers. Which reminds me, I was chatting to my skin specialist who was amazed to hear I was a writer. I laughed and told him all my friends were writers. He laughed and said all his friends were skin specialists! (In Australia we have to be careful of skin cancer. Don't know if people in the US have this problem and I guess in Canada you're happy to see the sun).

What are your favourite three books?

My favourite book is whatever I happen to be reading right now. I like to go into the specialty bookstore in town and ask the guy who works there for any obscure and interesting books that push the boundaries of their genre. Two of my ROR buddies have books coming out which play with the Dark Urban Fantasy genre. Trent Jamieson’s new series Death Works is about a guy who works for Corporate Death but for once the story isn’t set in the UK or the US, it’s set in steamy, subtropical Brisbane. And Tansy Rayner Roberts’ new series Creature Court combines shapeshifters, the 1920s and Ancient Rome and it works!

Oh no. I do terrible things to my characters. I really make them suffer. No way, would I want to swap places!

What was the first novel (published or unpublished) that you wrote and how long did it take to write it?

I'd written ten books before I was twenty five. (You see I'd read everything I could find in my bookshop that interested me. I was desperate for something to read so I started writing the books I wanted to read). Then I had 6 kids in 10 years. Then I went back to writing and sold the first children's book I wrote. I'd already done my apprenticeship. They say it takes about 10 years to learn the craft of writing. Of course, it wasn't smooth sailing. Silly me, I thought once you were published editors would look at your work differently but you still get rejections. The important thing to remember is Never Give Up, Never Surrender. You can tell I'm a true SF Nerd, I'm referencing Galaxy Quest!

If a scene is hard to write it isn't working for some reason. You need to come at it from another direction. Tell the scene from the point of view of the person who has the most to lose. Or you could go out and mow the yard. Doing something physical will free up your subconscious and, before long, the solution will pop into your mind. If changing the point of view character doesn't work, there's probably a scene earlier in the book that needs to be tweaked which will have a ripple on effect and make this difficult scene better.

Do you have any tips for aspiring writers?

The best thing I ever did for my writing - other than reading non stop. I used to have a bookshop and read a book before lunch, a book after lunch and a book after dinner- the best thing I ever did as a developing writer was start the ROR [Ripping Ozzie Reads] writing group. Marianne de Pierres and I had been running a writing group that concentrated on short stories. We wanted to challenge ourselves and polish our book length fiction. The group are really supportive, but really incisive, so you come away with useful insights into how to improve your book. Plus analysing other people's manuscripts helps exercise your analytical muscles, too. (For more detail including how to set up your own writing group, and how to critique see the site).

What’s the best/worst thing about writing?

Worst thing, not being able to switch off the internal editor. If I find a book that makes me forget I am reading then I'm delighted. I read it a second time to see what really works. Then I read it a third time to see what is weak. Then I go out and buy all the author's books and read them in chronological order to see how they grew and developed as a writer. You have to be a little bit crazy to be a writer!

KRKhd from Daryl Lindquist on Vimeo.

Email ThisBlogThis!Share to TwitterShare to FacebookShare to Pinterest
Posted by Jessica Strider at 10:09

this author will go on my toreads list. i love books that' sweep you into the story'.

-karin. now i better go shopping or i'll never get those dumplings made.