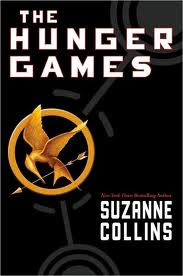 Cons: heavy subject matter for younger teen target audience, but author does a great job with it

Ever since the Treaty of Treason following the Dark Days when the 13 districts rebelled against the capitol and lost, the remaining 12 districts have given 2 youths as tributes for the yearly Hunger Games.

This year, district 12 is sending Katniss Everdeen and Peeta Mellark. Along with their counterparts from the other districts, these two will fight to the death in the Gamemakers' arena, for the entertainment of those in the capitol.

The Hunger Games is a teen reimagining of Koushun Takami's Battle Royale. With some important changes. The Hunger Games takes place in a post-apocalyptic America. In The Hunger Games everyone understands the purpose of the games (in Battle Royale this is only revealed at the end, where it has a bigger psychological impact), and there's a LOT less violence. Battle Royale depended on the shock value of its extremely graphic content to get its point across. The Hunger Games does a surprisingly good job of keeping the violence to a minimum given the novel's plot. And what violence there is, is fairly tame. Still, this is a book which I'd recommend parents read first and judge if their child is mature enough to handle what happens, and then discuss the contents with them afterwards.

The novel is very fast paced and compelling. being a teen book it's also a very quick read. I can't wait to finish the series and see what happens.
Email ThisBlogThis!Share to TwitterShare to FacebookShare to Pinterest
Posted by Jessica Strider at 12:29