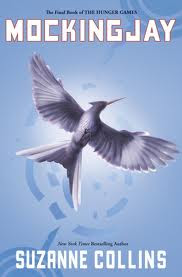 This book did exactly what I wanted it to at the end of Catching Fire. We see Katniss deal with the consequences of her desperate actions in a realistic manner, and then see her grow up in ways that are heartbreaking in one so young who has already been through so much.

Again, this review will have spoilers, so if you haven't read The Hunger Games and Catching Fire, I'd suggest you do so before reading further.

Katniss has been rescued after surviving her second games, by the rebellion forces of the no longer hiding District 13. Peeta was not. And President Snow has already retaliated by bombing District 12 into dust. Some survivors of 12 make it to 13 and help the rebels, but it's Katniss, the Mockingjay, the rebels really need. And she needs convincing.

Katniss grows a lot in this book. Her avoidance of her duties is less adolescent tantrum and more trauma victim. When she starts going too far, Haymitch reminds her that others have suffered as well, bringing her back to reality. She acknowledges that the war won't be won by her own actions. She's a figurehead, a symbol. And while she does some characteristically stupid things, she also learns from her mistakes and works hard to achieve her goals.

The depictions of the war are well done. They're gruesome, graphic and in no way glorifying. Collins shows both sides - Capitol and rebel - using tactics that ignore the potential loss of life, showing that in war all things are equal and in the end, only those in power are victors.

I loved the ending. I suspect this book will become a classic and that future generations will read and discuss this in school. The tone of the writing is more mature than that of the first two books. However, I think teens (depending on their age and maturity) will benefit from the messages contained in the novel.
Email ThisBlogThis!Share to TwitterShare to FacebookShare to Pinterest
Posted by Jessica Strider at 11:35