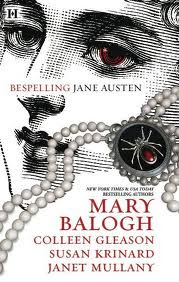 Bespelling Jane Austen is a great introduction to paranormal romance for anyone who enjoys romance, especially Jane Austen romances. The four stories get progressively more paranormal the further you read.

Each of the stories is based on a Jane Austen novel, and has an interesting premise. The first two stories remain in Victorian settings, the last two are modern day. Unfortunately not all the stories fare equally well in the mash-up.

The first story, Almost Persuaded, by Mary Balogh, is about a couple (Jane Everett and Captain Robert Mitford) who are doomed to keep reliving their failed romance until they stop making the same mistakes. Robert knows Jane's family won't accept him as a suitor for Jane, so he tries to convince her to elope with him. Unfortunately, the length of the story didn't give the author room to properly develop the characters or their coming to terms with the past life premise, so, while it starts very well, Jane ends up seeming very immature (unable to make a decision and stick to it) and Robert looks infantile (I won't explain why as it would spoil the story). And this is a shame, as Balogh's writing is excellent, the description and dialogue superbly done. I can only wonder what she'd have made of this story if she'd done it as a novel.

In Northhanger Castle, by Coleen Gleason, a very naive Caroline visits Bath with her aunt. Caroline's overactive imagination is given full reign, as she imagines the stories behind various people while touring the sites with friends. It's a thoroughly entertaining story, humerous in many ways as Caroline comes up with some VERY paranoid explanations for things. The ending is abrupt, leaving the reader with numerous unanswered questions.

Blood and Prejudice was my favourite story out of the collection, and not just because Pride and Prejudice is my favourite Austen novel. Susan Krinard brought in most of the elements of the original novel (truncated of course) and did so in clever ways. I particularly liked her reimagening of Rosings. Bingley's company is taking over Bennet Laboratories, and Elizabeth's not happy about it. She finds out Bingley's friend, Darcy, is a vampire, and sets out to learn what this fiend is up to. The story had a good ending, with everything nicely wrapped up. My only complaint is that her opening was a bit confusing, with BL (Bennet Laboratories) and BP (Bingley Parmacuticals) mentioned primarily via acronym.

The last story, Little to Hex Her, by Janet Mullany, tells the story of Emma, a scholarly witch running her sister's paranormal dating agency for a year. Things start to go wrong when her secretary Harriet turns a elven client, Elton, into a frog. This is the only story in the collection with numerous types of paranormal characters. Emma and Knightly's negative traits from the book are amplified in this story, making Emma, already a hard character to like, even harder. And yet Janet Mullany pulls it off, making them seem like people who've made bad choices in life and now have the chance to put things right.

In the end, it's a good collection of stories. There are some flaws, but some great writing as well.
Email ThisBlogThis!Share to TwitterShare to FacebookShare to Pinterest
Posted by Jessica Strider at 10:58