This area was originally called Adefa (or Arafa?) and was established as a local fiefdom in the 7-8th century. When the Zagwe kings made it their capital during the 12-13th centuries they renamed it Roha.

King Lalibela reigned from 1181-1221 (according to one calendar, see my previous post for more information on the Zagwe rule and the difficulties of dating things). The complex and town are now named after him.

The 11 church complex is actually two complexes and one stand alone church. The first complex people tend to visit is the northern one, which is later and so will be examined tomorrow. The south complex is now a series of churches but archaeologists believe it may have originally been built as a palace, given the odd alignment of the buildings (churches are usually on an east-west axis that is missing in many of these) and some of the features. 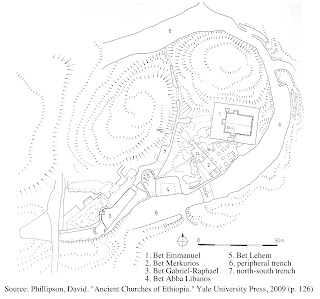 King Lalibela ruled during the period when the Holy Land (ie, Jerusalem) was conquered by the Muslims. Pilgrimage was already challenging since the kingdom no longer had a port on the Red Sea. Now it was dangerous. Legend states that King Lalibela was poisoned by his brother and while in a coma he saw a vision telling him to build a new Jerusalem. This site is therefore seen by many as an Earthy Jerusalem (the north complex) and a Heavenly Jerusalem (the south complex). The religious belief is that all of the churches were carved out of the rock in 23 years due to angels working on it at night. Historians in the books I read aren't certain how long it took, but don't think they were all done at the same time considering the quality/skill of some of the churches compared to others.

The first churches of the south complex you visit on the tour are the combined Gabriel-Raphael. You cross a small bridge to get to them. The churches inside are fairly small. Historians believe this may have been a royal palace or perhaps the palace of the Abuna (Patriarch). In the 'Jerusalem map' it's considered the 'road to Heaven'. 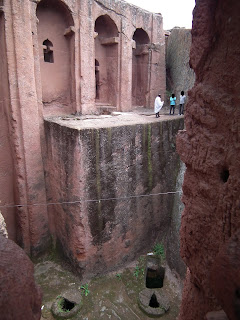 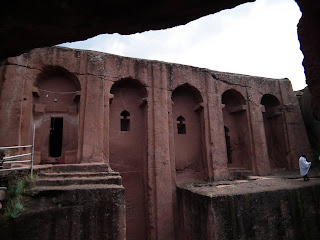 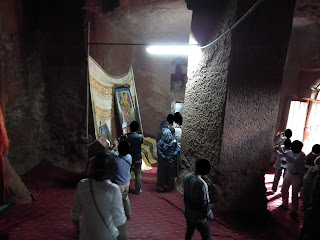 This complex has a number of channels for walking and for funnelling water away from the site. You take one to get inside the next church, Bet Lehem. Our guide, who grew up in Lalibela and whose father was a priest at one of the churches, said that he played here as a child. 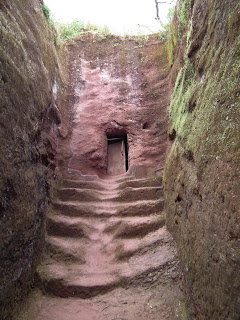 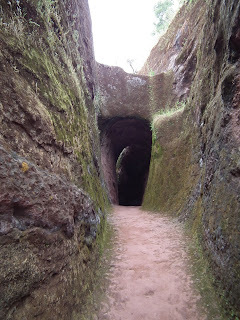 Bet Lehem means 'house of bread' and some believe it's where the Eucharistic bread was baked. The numerous holes in the upper wall seem to bear that out. 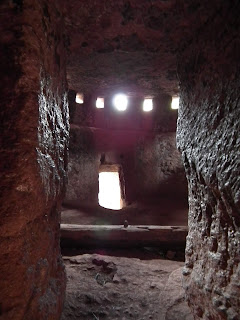 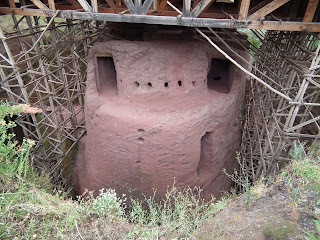 From here you take a tunnel to the next church. Symbolically the tunnel represents hell and is to be walked without light. You put one hand on the wall, and the other on the ceiling and walk slowly through the 35m (book said 35, guide said 41). It's quite disorienting as you're convinced you can see light ahead. The tunnel curves and descends a bit as you walk. 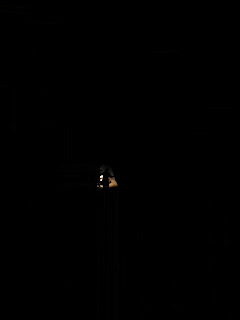 You come out at Bet Merkurios, or purgatory. The day we were there it was a feast day for St. Merkurios so we couldn't get many photos. We went back the next day to better see the inside. One window is shaped like a cross, and seen from the right angle you get a beautiful bokeh effect. This building is very oddly shaped. Ankle shackles were found here which has led some to believe that it might have acted as a prison or courtroom. Part of the building has collapsed, so it's not as large as it used to be. 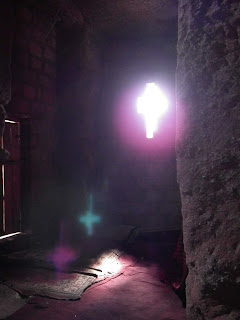 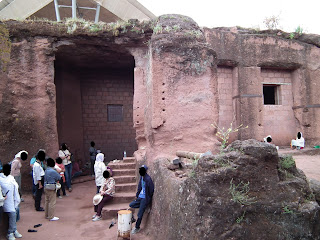 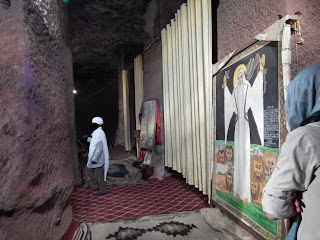 Through a short tunnel and down some stairs and you come to Bet Emmanuel, Paradise. This is a free standing monolithic church 17.5m x 11.5m and 11m high. It is finely carved, with the inside and outside lining up perfectly to look like an Axumite building (with alternating stone and wood layers). Inside there is a double Axumite frieze in the nave. 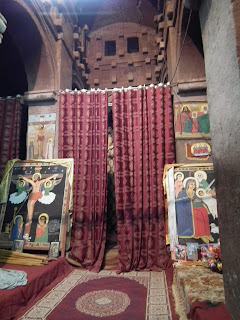 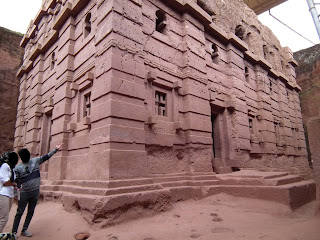 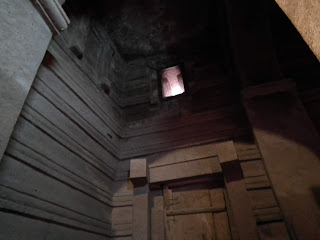 Outside there are chambers in the walls (this is true of many of the churches with large courtyards) that act as graves for pilgrims. In some cases the caves are inhabited by pilgrims (if there's a blanket hanging across the entrance). The final church in the complex is reached via an outside tunnel. 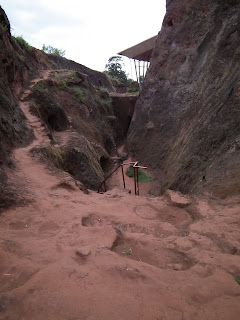 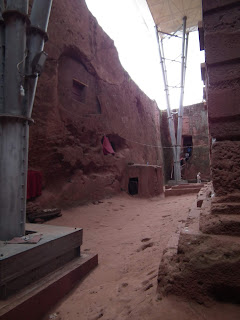 Bet Abba Libanos is the only church here where the ceiling and floor are still attached to the rock. It represents cherubim (angels) supporting the throne of God. The edge of the interior pillars are carved with angel eyes. Legend says it was built by King Lalibela's wife in a single night with the help of angels. It is also believed to be the final building carved out at this site. 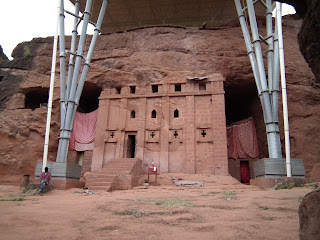 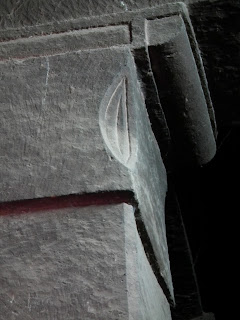 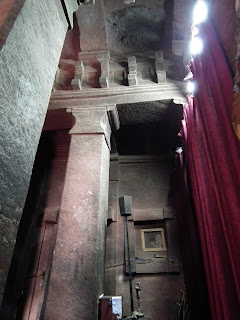 Just outside the complex is the "Jordan river" with a cross to mark where Christ was baptized. During the rainy season it would have water in it. 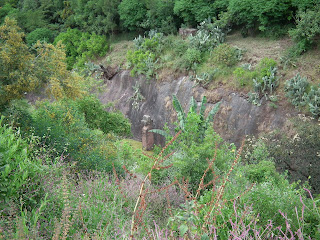 Email ThisBlogThis!Share to TwitterShare to FacebookShare to Pinterest
Posted by Jessica Strider at 16:29