The North complex at the site consists of several churches joined by tunnels. It's built with more verticality, so there's a section where a tunnel and courtyard are overtop another church.

You begin the tour by going down a set of carved stairs to see the largest church on the site: Bet Medhane Alem (Saviour of the World). In terms of the site being a replica of the Earthly Jerusalem, this one represents the tent of the Ark of the Covenants. A second site interpretation that our guide pointed out was that the site was the body of Jesus, with this church acting as the head. 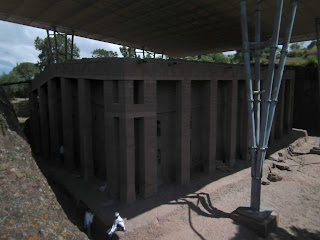 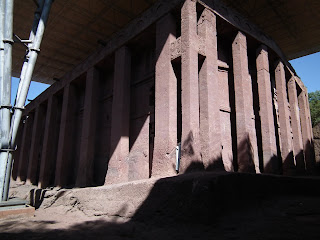 The southeast corner pillars are joined by small pieces of rock with crosses carved in them, symbolizing the Trinity. Many of the exterior pillars have been replaced. The original ones would have been directly carved out of the rock like the church proper. 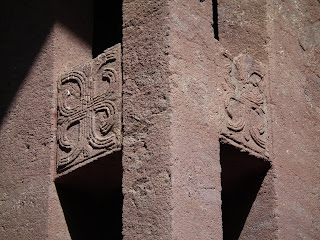 There's amazing alignment between the inner and outer carvings. In the north aisle near the altar are 3 'tombs'. It's unclear whether they're the actual tombs of Sidi Meskal and two of his companions or if they're symbolic and are meant to represent Abraham, Isaac, and Jacob. Above the curtain sectioning off the main sanctuary is an arch with some symbolic disks representing the shields and crown of King Lalibela. 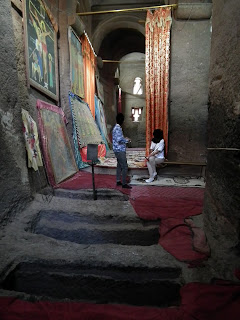 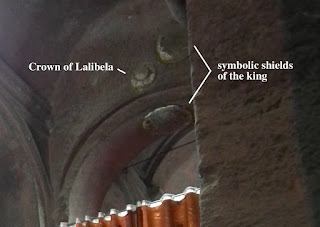 A short tunnel opens out into a very large courtyard. There are three pools of water (for baptisms and healing), two small churches carved into the walls, and a central church: Bet Maryam. 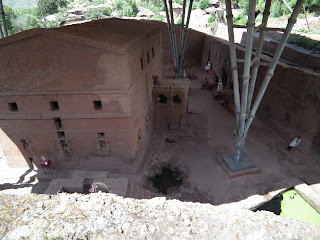 The church on the north wall is Bet Masqal (House of the Cross) and has a cross carved into the ceiling. It represents the right hand of God. The four pillars dividing the gallery into 2 aisles represent the 4 evangelists. 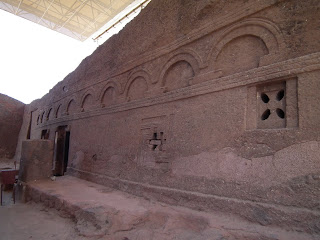 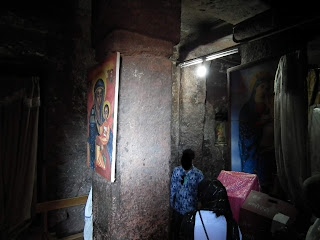 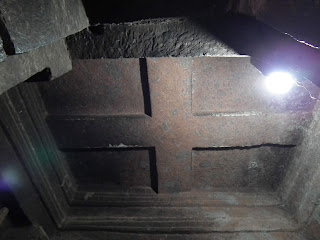 The church on the south wall leads to another channel through which you can access the site. It is Bet Danagel (House of the Virgins). It represents the left hand of God and/or the Christian virtues of faith and love. Records show that it existed in 1280 and may have been made for a community of nuns, so it's more humble that some of the other buildings. 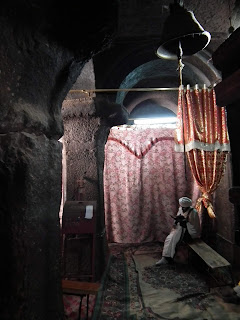 Bet Maryam represents Gethsemane / the body of Christ. It was likely founded by King Lalibela as a royal church and is richly decorated inside. Outside the east wall has symbolic windows. The top row of three represent the Trinity. The central three read vertically are for the resurrection, incarnation (womb of Mary) and crucifixion. The bottom set read horizontally has Christ crucified in the middle. On the right is the thief who went to heaven (represented by the T shaped window above) while on the left is the thief who did not repent (with the T below indicating he went to hell). 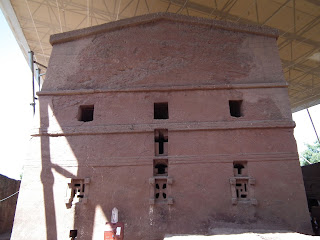 It is also the only church in the complex to have porches. Above the west porch is a bas relief carving of two figures on horseback. There's dispute over who these represent but one theory is that one of them is a king and the other is St George. 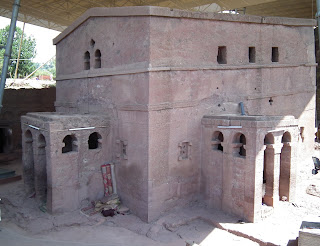 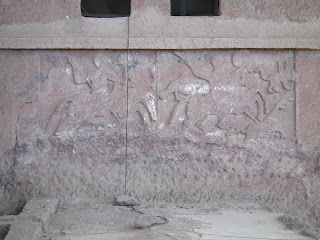 Inside most of the ceiling and arches are painted. There are crosses, two headed birds, some religious icons (including Christ with the woman at the well pictured below). There is also a pillar said to be carved with prophecies explaining the history of the world to the end of time. It is kept covered with a white cloth. 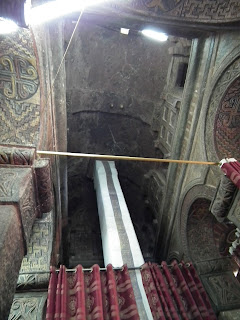 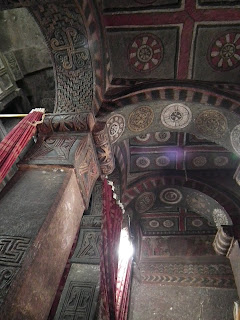 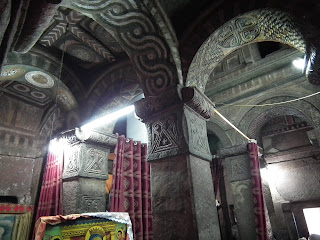 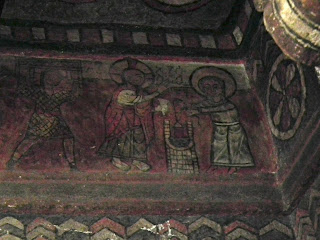 To the west of this is a series of small caves that included Lalibela's tiny library and study (according to our guide). Apparently Lalibela was a tall man, as the stairs were built at two sizes, one for him and one for regular people. 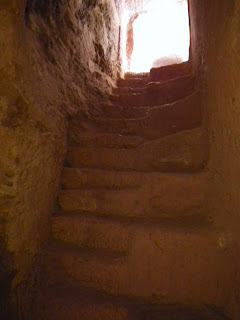 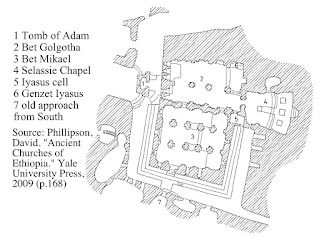 From here you go down into the complex to the combine lower church of Bet Mikael (formerly Bet Debre Sina aka Mount Sinai) and Bet Golgotha. These churches represent the legs of Christ. Bet Mikael has cruciform pillars with relief carved crosses and eyes on them. 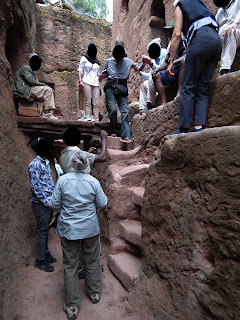 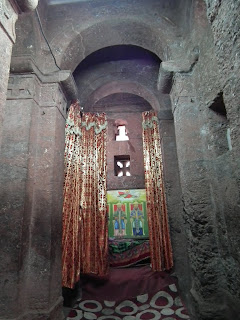 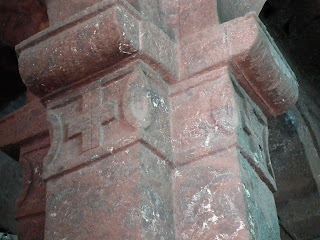 Bet Golgotha represents the Holy Sepulchre and only men are allowed inside, though the priest was nice and let the women stand at the doorway and take photos. My guide was also kind enough to go in and take some photos for me. This is the only church in the complex with life sized carvings of people in wall niches. There's also a painting of a woman beside one of the figures (one source said it was St Mary, another that it was St Cyriacus's mother. St Cyriacus was martyred as a child and is the labelled figure next to the painting). The Selassie chapel mentioned on the floor plan above is closed to the public. 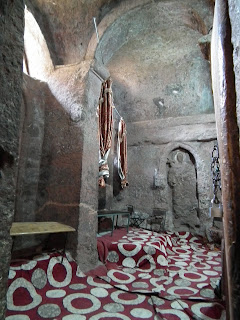 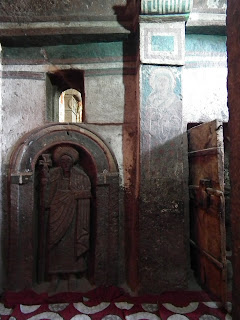 Outside the churches is another tunnel with a large stone that was once a hermit's cell now called the Tomb of Adam. Above it you can see a window in the stone. This was the proclamation window of King Lalibela, where he could address his subjects. 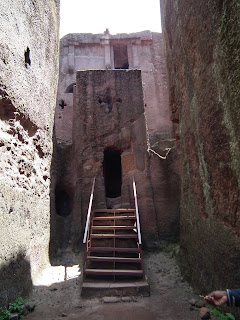 A little south of this site lies the only single church at Lalibela, Bet Giyorgis. It's a masterpiece of carving with attention given to water runoff. Our guide said that the building represents the Ark of Noah, with the bottom floor only having false windows, the second none, and the third having 12 that open for the dove to return. There's a... hill... at the rear of the courtyard that he said symbolized Mt Ararat. 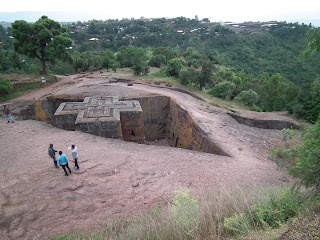 It's also one of the few churches where the access route hasn't been modified (you go down two slanted corridors). Near the bottom of the second corridor are holes in the wall said to be from the horse of St George who confronted King Lalibela over the fact that none of the churches were dedicated to him. King Lalibela promised that he would get the finest church. And it is a fine church. It's also the only one where the Italians haven't put up ugly massive covers (the covers protect the sites from the weather but were built so close to the structures there's fear that they have damaged the foundations. The French government is currently surveying the site to see if a different protective covering can be installed). The baptismal pool was full of reeds (and dragonflies!) but is still a working church as our guide and driver were both baptized here as children. 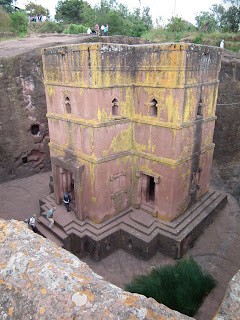 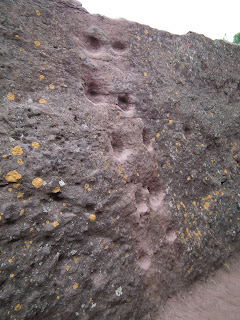 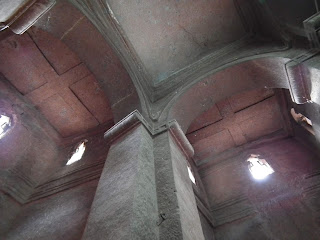 Email ThisBlogThis!Share to TwitterShare to FacebookShare to Pinterest
Posted by Jessica Strider at 14:43