Book Review: Ethiopian Painting in the Late Middle Ages and During the Gondar Dynasty by Jules Leroy 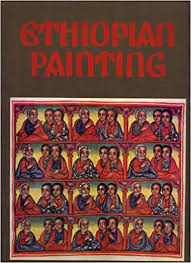 Pros: one of the first books to cover the subject, gorgeous reproductions of the paintings discussed

Cons: at times dismissive of the skill/style

Published in 1967, this is one of the first books to cover Ethiopian painting in the late middle ages and during the Gondar Dynasty. As such, it’s immensely important in bringing examples of this artwork to the attention of the outside world (though Ethiopian history and art still hasn’t gained much Western interest).

The bibliography at the back shows just how limited sources on this topic were (and still are).

While the author admired some aspects of Ethiopian art - enough to write a book on the subject - it’s also clear that he considered other aspects beneath those of Western and Asian artists. On page 24 for example, he writes, “Many Ethiopian paintings of the 15th and 16th Centuries reveal a similar character to that of the Irish miniatures, though with less talent and less subtlety.” Comments like this abound, where he compares the Ethiopian paintings to those of other nations and finds them wanting.

The book is excellent for pointing out details those unfamiliar with Ethiopian life and Christian tradition might otherwise miss. For example, in images of the Flight into Egypt, a maid is seen accompanying the holy couple. Sometimes she’s carrying the Christ child, others she has a container of injera (flat bread) on her head.

I found the discourse on how European, Byzantine and Indian art at times influenced that of Ethiopia. It shows that ideas travelled around the world, despite how insular modern audience believe nations were in the past.

While it’s not a perfect book, it is an important one and has some gorgeous artwork. It is out of print, but you may find a university or museum library that has a copy you can read.

Email ThisBlogThis!Share to TwitterShare to FacebookShare to Pinterest
Posted by Jessica Strider at 15:25