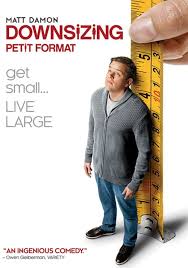 Cons: asked some great questions that it didn’t want to answer, meanders

A Norwegian scientist discovers a way to shrink people as a means of reducing humanity’s impact on the planet. Paul Safranek’s life changes drastically when he undergoes the procedure.

I thought the premise of the film was good. Apparently the writers weren’t sure what to do with the shrinking idea though. The first section of the film concerns the idea of shrinking. Then it’s like a different movie started once Safranek took the plunge. Suddenly it focused on Safranek’s aimlessness and potential love affairs.

The first section posed a lot of interesting questions about what humans are doing to the earth and whether/how this solution might help. I thought the film would go into more discussion about the different options - especially when something goes wrong with Safranek’s shrinking plan - but it didn’t. The film just carries on like none of those concerns matter any more once he’s small. Until the very end when suddenly those concerns are apparently very important again, but only for one group of people. I was also concerned that a new friend of Safranek literally states that his business model requires that he exploit small people in poorer countries, and that’s never addressed. Similarly, while people show mild horror at some of the exploitation and abuses involved with shrinking (prisoners forcefully undergoing the procedure for example) this is largely ignored by the film once it’s mentioned.

My husband pointed out a lot of the physics problems concerning the shrinking process itself - and not just the obvious one that you can’t shrink humans that much without causing major internal issues. Things like - shaving off hair won’t help if bits of hair are still left in the follicles (you’d have to do a full body wax).

I was rather disappointed that we didn’t see more of how things worked in practice. Some people complained about the economics for those left behind and whether small people deserved equal voting rights. These are fascinating questions and they’re brushed aside as unimportant.

I enjoyed the first part of the film and thought the rest was a boring meander through stuff Safranek does to pass the time and feel good about himself.

Email ThisBlogThis!Share to TwitterShare to FacebookShare to Pinterest
Posted by Jessica Strider at 10:55