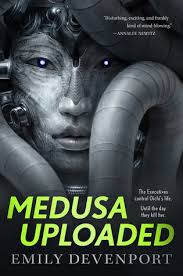 Oichi Angelis is a murderess and conspirator upon the generation spaceship Olympia. Using a Medusa unit, she’s been taking out key members of the Executive class. But the Executives aren’t the only threats to her mission to overturn the ship’s rigid class system.

The back cover synopsis for this book calls Oichi a ‘worm’, which I’d misinterpreted as meaning she was either a computer program or A.I. of some sort. So I was surprised to discover she was a human, and that ‘worm’ was a slur for low level people on the ship. Oichi is a fascinating character, who’s completely unapologetic about the live’s she’s taken (who are mostly horrible people), that you can’t help but like her. In many ways it’s her connection with Medusa, a partly biological machine, that allows her to be such a good assassin.

The world-building is great. The author manages to explain the ship’s history in ways that felt organic but not intrusive. For example, there’s a scene where Oishi is pretending to study for school while she’s actually doing something else. So the narrative is interrupted by occasional digressions of the video that’s playing on her screen. At other times we learn about the ship as she does, especially with regards to the executives and their dealings.

There are several overlapping mysteries, all introduced in layers. One mystery is a snippet of conversation Oishi overhears as a child. As she grows up she tries to understand what the Executives were saying, but her interpretation changes as she learns more and more.

Chapters are written in a circuitous way, starting with foreshadowing of what’s going to happen, then a linear narrative leading back to what was hinted at or stated earlier. I was impressed at how well the author managed to guide you through the narrative. There was only one spot where I was confused about when an event happened, and that was cleared up quickly. As Oichi learns more about one mystery, others - so many others - come to light. The book keeps you guessing about everyone’s motivations.

I really enjoyed this and can’t wait for the next book.