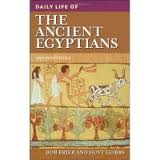 Pros: lots of good information about how normal Egyptians lived

This is an overview of the life and times of ancient Egyptians, covering history, religion, government, work/play, food, clothes, architecture, arts/crafts, technology/construction, warfare and medicine/mathematics.  There's an extensive bibliography (including internet sources) and glossary of terms at the back.

Each section seems designed to be read independently from the others, for those doing research on one aspect of ancient Egyptian life, so if you read it through from start to finish (as I did) there's a lot of repetition.  The authors do a really good job of summarizing each topic, given the time periods involved and the changes encountered during different periods of Egypt's history.

My main complaint is that instead of photographs the authors primarily used hand drawn images to illustrate their information.  There are some photos, but they're few and far between.

Also, the final chapter, about medicine and mathematics, fails to mention the Egyptian practice of trepanation (cutting/drilling a hole into a patient's skull to relieve pressure on the brain), which surprised me.  The authors also spent a lot of time in this chapter pointing out how modern medicinal practices are better than what the ancient Egyptians use.  I didn't need that pointed out.

I did enjoy the book and I learned a lot about ancient Egyptian life that I'd never heard or considered before.

Email ThisBlogThis!Share to TwitterShare to FacebookShare to Pinterest
Posted by Jessica Strider at 10:53