Book Review: All Our Yesterdays by Cristin Terrill 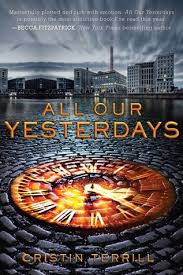 For Parents: some violence (murder, torture), no swearing, off screen sex

When Em finds the note in the drain of her prison cell, she knows she and Finn have travelled back in time 14 times, and that they've failed in their objective to save the future.  There's only one course of action left to them, to kill the man who made time travel possible, their former best friend and the man Em used to love.

This book was VERY hard to put down.  The characters feel real, their emotions felt true to life but without the overarching angst that sometimes makes YA hard for adults to enjoy.  Marina has complex relationships with everyone in her life.  She's afraid her best female friends only like her because they want to get closer to James.  Her parents are having trouble in their marriage, using her as a go-between.  She loves James but isn't sure he feels the same way.  And she's jealous of how close Finn and James have become, and so treats Finn badly, even if he doesn't always deserve it.

It's the first YA novel I've read that captured how conflicted I felt as a teen, so I really connected with Marina's character.

Em and Finn - the future versions - are equally complicated characters, having to make a tough decision knowing the pain it will bring their younger selves.

The two guys, one girl, formula sounds familiar but Terrill does great things with it.  Marina loves James and dislikes Finn.  Finn likes Marina, but recognizes that she doesn't like him back, which makes him snarky and bitter towards her at times.  And James... well, it's unclear what he feels.  Even their older selves have a unique dynamic.

Though I felt that Em's compunctions about killing her former crush were realistic, I started to feel the scenes involving close calls with him became contrived towards the middle of the book.  The last quarter of the book shook things up again, which I really liked.

There's little told about the dystopian future the teens are from or the science involved with time travel, so if that's what you're looking for, look elsewhere.

The ending felt abrupt, but on further reflection - and rereading some scenes - I realized that it fit what the author said about time travel.  This is a great book to reread, as you pick up all sorts of details you miss - especially in the first few chapters - the first time through.

Finally, it's great to read a YA dystopian novel and have it stand on its own.  I highly recommend this one.

Note: The author's done a series of prequel videos, which you can find on her website.  Note, these take place in the future with Em and Finn being tortured in prison before the start of the novel.
Email ThisBlogThis!Share to TwitterShare to FacebookShare to Pinterest
Posted by Jessica Strider at 17:06