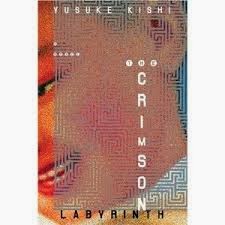 Cons: introduced to too many characters at once making them hard to remember

When Yoshihiko Fujiki wakes up in a red stone canyon in the rain, he has no idea where he is or what's happened to him.  All he has are a few basic supplies and a handheld game system welcoming him to the Mars Labyrinth.  Before he has the chance to follow the directions to the first checkpoint he runs into another player, Ai Otomo.  Her game system is broken, so they team up to face... whatever comes next.

This is a novel that starts slowly - with Fujiki trying to figure out what's going on - but quickly builds momentum.  Like the characters, you're horrified by the turns the 'game' takes, as some of the players become less and less human.  And though Fujiki has some ideas of what's happening behind the scenes, figuring that out isn't as important as staying alive.

Try not to read the book's back cover synopsis as the first paragraph contains a spoiler that will colour how you read the novel.

The premise of the book is pretty creepy.  It starts off as a survival game with everyone in the wilderness.  As time goes on and a trap set by those running the game is activated, things shift and it becomes a different kind of survival game.

The protagonists are pretty interesting, with down on their luck backgrounds.  Fujiki took a while to grow on me, but I liked his tenacity and cleverness.  While Ai gives good advice at times, she mainly stays in the background, letting Fujiki make most of the decisions.  The other players all have unique personalities, though you don't see much of them.

Fujiki and Ai encounter the other players at the first checkpoint and you're given a quick introduction of all of them.  It's too many people, too fast, several of whom have similar names.  I found that later in the book, when the pair met up with them again, I couldn't remember who was who.

I'd recommend this to people who would like a less violent Battle Royale.  It's got a bit of mystery, a bit of survivalistic writing, a tiny bit of romance and several violent, though not too graphic, deaths.

Email ThisBlogThis!Share to TwitterShare to FacebookShare to Pinterest
Posted by Jessica Strider at 13:49