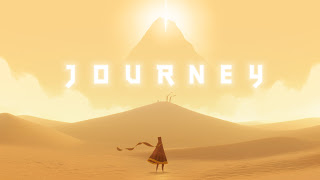 By: That game company

Cons: limited story, only available on the PS3

I'm not usually one to review video games, namely because I don't play them often (though I enjoy watching my husband play them, provided there's a good story).  But this game is so beautiful and unique I thought I'd mention it here in case there are people who'd be interested who otherwise wouldn't hear about it (it has won several game awards but I only heard of it recently).

You're a red robed character in a desert.  Walking (or sliding) through the sand to stone ruins, you sing to unlock swirls of magic that allow you to fly for short periods of time.  Your goal, told only through images, is to get to a split mountain top.  Along the way you're given a friend (another player on the playstation network) who can help by keeing your magic charged via proximity.  If you get separated from your friend, you may get connected with other players as you continue on but only one at a time.

The game play is easy, using only the two analog sticks (one to move and one to control the camera - which is what tripped me up the most) and two buttons (one to sing and one to fly).  You can also tilt the controller to look around, though using the sticks was easier for me.  In a lot of situations the computer seemed to put me where I needed to go, though finer control is needed towards the end where you fly to and walk over thin platforms.

On two levels of the game mechanical monsters attack.  If they hit you they take your magic tail, decreasing your flying abilities.  Beyond that, the game is about exploring the beautiful scenery and following the mostly linear path to the mountain peak.  If you get a good friend, you can use each other to keep flying higher and higher without needing an outside magic replenishment source.

Unfortunately it's only available on the PS3.  It's around $10 to buy and only takes 2 hours or so to play (depending on how much exploring you do), but it is a beautiful game and something a new player (or hesitant player) can master quickly.  So if your significant other isn't into games and you want to share your hobby, this is a good one to try.  It's also got soothing, almost meditative music.

Here's the game trailer.  It starts 30 seconds in.
Email ThisBlogThis!Share to TwitterShare to FacebookShare to Pinterest
Posted by Jessica Strider at 20:40