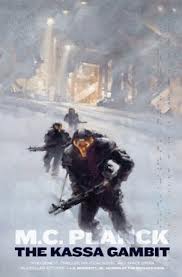 Prudence Falling, captain of a tramp freighter, is first on the scene after an alien attack on the rural planet Kassa.  When the Altair Prime fleet ship Launceston arrives hours later, information about the attack is still sketchy.  A League officer, Kyle Daspar, on the ship who's actually an anti-league operative working undercover, commandeers her ship while the Launceston goes for help.  Prudence, her crew and Kyle discover a downed alien craft while rescuing people from an arctic station.

After leaving Kassa, both Prudence and Kyle dig deeper into the mystery and discover that more's going on then just the discovery of aliens.

I requested this book from the publisher not realizing it was going to be a romance novel.  I expected a story about first alien contact either like Embassytown (dealing with an alien culture) or Forever War (where humans and aliens stay at war for decades).  What I got was a romance with a mystery side plot.

Now, while I'm not a fan of romance novels (where the focus is on the romance) I like romance as a plot thread in my novels, as long as it's handled well, being integral to the plot and an organic response to the character's actions.  The romance here was too heavy handed for my taste.  There were scenes when the characters thought about each other when other concerns should have been more important.

For example, after being on the ship together for an undocumented 16 hours helping people on Kassa, they discover the alien craft.  They're examining it when the following scene occurs.  It's important to know that though humans have travelled the universe for generations and populated numerous planets, this is the first alien contact.  Ever.  To set the scene, Prudence has put her hand inside the shattered cockpit and made a discovery.  She wants to see if Kyle comes to the same conclusion.

"What do you not feel?" she asked.

Dumbly, he shook his head.  What he wanted to feel was her hand in his, her warmth and smoothness.  But through the insulation of the suit, he couldn't feel anything at all.

All I could think when reading this was, you're the first humans to see an alien spaceship and you're thinking about touching her hand?!?  WTF?

The romance is strong at the beginning of the book, vanishes for quite a while and reappears towards the end.

The other thing that bothered me about the book was Kyle's paranoia.  Because he's an officer of the hated League while at the same time being secretly anti-league, he's always second guessing why people act as they do and if someone's out to kill him.  This becomes tedious to read in the opening chapters but quickly gets toned down as the plot picks up.

One reason his constant waffling is annoying is because the League is never properly explained.  As the book progresses you discover it's not the government, nor is it an inter planetary trade alliance (both guesses I had).  It's obvious that the League has a lot of power, but it's not obvious what the power is from.  Since it impacts so much of the story, this is an important lapse.
So, what did the book do well?  Characters.  Romance aside, the characters were great.  Prudence is a strong woman who knows what she wants and makes difficult decisions.  Her crew is eclectic, and her navigator, Jorgun, is an idiot savant.  Jorgun quickly became my favourite character.  Prudence cares for him like a mother, but she also puts him in sunglasses and uses him for intimidation when going to dangerous ports (even though she knows it's an act and he's not capable of violence).

My one complaint about Prudence is that she's pretty full of herself when it comes to her attractiveness.  At one point, while thinking of Kyle, she thinks, "She'd never been around a man, single, married, or homosexual, that hadn't risked at least one bantering comment for her approval." (p. 68).  She's also pretty negative/dismissive towards two of the women she saves in the arctic, calling them 'the blond' and 'the smart one'.

The setting and early action regarding the space mine were all done without info dumps, using character quirks to explain things to the reader without being reduced to 'as you know' sentences.  And while this definitely isn't hard SF, the science sounds plausible to a non-scientist reader.

The plot really picks up after they leave Kassa.  From that point it becomes an action/mystery novel, with both Kyle and Prudence discovering things about the aliens and politics on Altair.  I greatly enjoyed this part of the novel, and when the romance reentered the book at the end, it didn't bother me as much, though there were a few eye rolling moments.

The middle to end of the book I started underlining sections that I thought were philosophically interesting.  The idea of tech-ten, for example, was pretty cool.  I used to collect quotes from novels all the time and haven't found much of interest in the past few years.  So it was fun coming across so many thought provoking quotes.

The author used interesting vocabulary shifts to show how language changed over time.  I thought that added a touch of varitas to show that certain words were misunderstood or no longer understood at all.  However, there were several times when one character mentioned something, a pumpkin for example, and someone else wondered what it was.  It made me wonder why some words/expressions were still used if the objects weren't understood/no longer existed.  While it's possible one character is from a world that still grows pumpkins and the others aren't, it still felt like an oddity after the scenario happened several times.  Similarly, foreign words are used at times and understood though it appears all the worlds speak English.

Ultimately, it wasn't my kind of book though it was a quick read and there were several things I really enjoyed about the book.  The ending felt rushed but things were tied up well, with the mystery fully explained.  I loved Jorgun, and for his character alone I'd recommend the book, provided you like romance.
Email ThisBlogThis!Share to TwitterShare to FacebookShare to Pinterest
Posted by Jessica Strider at 10:17