These are books that publishers/authors have either sent me or let me download eARCs for during the month of January.

The Office of Mercy by Ariel Djanikian

Twenty-four-year-old Natasha Wiley lives in America-Five-a high-tech, underground, utopian settlement where hunger and money do not exist, everyone has a job, and all basic needs are met. But when her mentor and colleague, Jeffrey, selects her to join a special team to venture Outside for the first time, Natasha's allegiances to home, society, and above all to Jeffrey are tested. She is forced to make a choice that may put the people she loves most in grave danger and change the world as she knows it.

The Daylight War by Peter Brett
The synopsis for this book contains spoilers for the previous two books, so I'm giving the synopsis for the first book in the series, The Warded Man instead.  I've finished reading The Daylight War and it was fantastic.  I'll be posting my review of the book February 5th and it will be in stores on the 12th.  Don't you just love that cover?

As darkness falls after sunset, the corelings rise-demons who possess supernatural powers and burn with a consuming hatred of humanity. For hundreds of years the demons have terrorized the night, slowly culling the human herd that shelters behind magical wards-symbols of power whose origins are lost in myth and whose protection is terrifyingly fragile. It was not always this way. Once, men and women battled the corelings on equal terms, but those days are gone. Night by night the demons grow stronger, while human numbers dwindle under their relentless assault. Now, with hope for the future fading, three young survivors of vicious demon attacks will dare the impossible, stepping beyond the crumbling safety of the wards to risk everything in a desperate quest to regain the secrets of the past. Together, they will stand against the night. 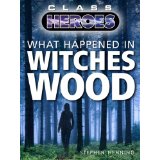 What Happened in Witches Wood by Steve Henning
I read Henning's first book, A Class Apart, and really enjoyed it, so when he offered me the second I jumped at the chance.  Now to make room in my schedule to read it...

In 1987, 16-year-old Katie Blake died in mysterious circumstances in a stream in Witches Wood.
In 2009, a teenage couple enter the wood one hot, summer night and encounter her ghost.
In 2011, James and Samantha Blake are staying at their grandparents’ farmhouse, close to Witches Wood, while they come to terms with their new superpowers.

Those powers are soon put to the test. James comes face-to-face with the ghost of Katie Blake – his long-dead aunt – and discovers that she may be responsible for a number of grisly deaths that have occurred in the wood. Meanwhile, Sam foils an armed robbery in a nearby village and sets in motion a chain of terrible events that threatens the whole family.

Sir Michael Rosewood, owner of the world’s largest pharmaceutical firm, knows the secret of their superpowers and has taken a keen interest in the Blake family. But is he friend or foe?

Luck of the Draw by Piers Anthony
I haven't read a Xanth novel in years, but the plot of this one interests me, and doesn't seem to require having read the umpteen previous books.

Bryce is summoned to Xanth as part of a wager between the Demons Earth and Xanth. To his surprise, he has left behind his home and family and eighty-year-old body forever, in exchange for youth and magic….and a quest. He must court and marry Princess Harmony, who is anything but willing to be courted!

The Death Cure by James Dashner
I read and reviewed this book, the third in the Maze Runner series, when it came out in hardcover.  It's a good series, though I wanted to learn more about Thomas's past than was revealed.

Thomas knows that WICKED can't be trusted, but they say the time for lies is over, that they''ve collected all they can from the Trials and now must rely on the Gladers, with full memories restored, to help them with their ultimate mission. To complete the blueprint for the cure to the Flare.

What Wicked doesn't know is that something's happened that no Trial or Variable could have foreseen. Thomas has remembered far more than they think. And he knows that he can't believe a word of what WICKED says.

The time for lies is over. But the truth is more dangerous than Thomas could ever imagine.

Continuing from Count to a Trillion, Menelaus Illation Montrose-Texas gunslinger, idealist, and posthuman genius-has gone into cryo-suspension following the discovery that, in 8,000 years, a powerful alien intelligence will reach Earth to assess humanity's value as slaves. Montrose intends to be alive to meet that threat, but he is awakened repeatedly throughout the centuries to confront the woes of an ever-changing and violent world, witnessing millennia of change compressed into a few years of subjective time. The result is a breathtaking vision of future history like nothing before imagined: sweeping, tumultuous, and evermore alien, as Montrose's immortal enemies and former shipmates from the starship Hermetic harness the forces of evolution and social engineering to continuously reshape the Earth in their image, seeking to create a version of man the approaching slavers will find worthy.
Email ThisBlogThis!Share to TwitterShare to FacebookShare to Pinterest
Posted by Jessica Strider at 13:43