There are so many books I'd love to read, both old and new.  Since I won't actually get to read them all, I figure I could showcase some.  Maybe other people will read them and tell me what I'm missing. :)  Here is the first batch of books I 'discovered' while working overtime at the bookstore this Christmas season.  Because I was working all over the place, rather than just in fiction, it's a more eclectic list than usual.  All synopses are from the Indigo website.

The Law of Superheroes by James Daily and Ryan Davidson

An intriguing and entertaining look at how America's legal system would work using the world of comic books.

The dynamic duo behind the popular website LawAndTheMultiverse.com breaks down even the most advanced legal concepts for every self-proclaimed nerd.

James Daily and Ryan Davidson-attorneys by day and comic enthusiasts all of the time-have clearly found their vocation, exploring the hypothetical legal ramifications of comic book tropes, characters, and powers down to the most deliciously trivial detail.

The Law of Superheroes asks and answers crucial speculative questions about everything from constitutional law and criminal procedure to taxation, intellectual property, and torts, including:
Engaging, accessible, and teaching readers about the law through fun hypotheticals, The Law of Superheroes is a must-have for legal experts, comic nerds, and anyone who will ever be called upon to practice law in the comic multiverse.

The Science of Superheroes by Lois H. Gresh and Robert Weinberg

The truth about superpowers . . . science fact or science fiction?

Superman, Batman, The X-Men, Flash, Spider Man . . . they protect us from evildoers, defend truth and justice, and, occasionally, save our planet from certain doom. Yet, how much do we understand about their powers?

In this engaging yet serious work, Lois Gresh and Robert Weinberg attempt to answer that question once and for all. From X-ray vision to psychokinesis, invisibility to lightspeed locomotion, they take a hard, scientific look at the powers possessed by all of our most revered superheroes, and a few of the lesser ones, in an attempt to sort fact from fantasy. In the process, they unearth some shocking truths that will unsettle, alarm, and even terrify all but the most fiendish of supervillains. 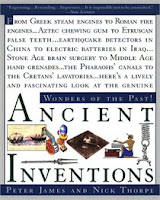 We in the twentieth century tend to assume that our era has a monopoly on the inventions of clever machines, labor-saving devices, feats of engineering, and advanced technology. But as the authors of this fascinating and eye-opening book reveal, some of humankind''s most important and most amazing inventions actually date back thousands of years.

Historian Peter James and archaeologist Nick Thorpe have pooled their expertise in amassing this compendium of human ingenuity through the ages. Together they conclusively prove that our ancestors, however long ago they lived and whatever part of the globe they occupied, were brilliant problem-solvers. Written with the pure joy of discovery, Ancient Inventions reveals that:
* Medieval Baghdad had an efficient postal service, banks, and a paper mill.
* Rudimentary calendars were being used in France as early as 13,000 B.C.
* Apartment condominiums rose in deserts of the American Southwest a
thousand years ago.
* The ancient Greeks used an early form of computer.
* Plastic surgery was being performed in India by the first century B.C.
* The Egyptians knew about effective contraceptives.
* Flamethrowers were used in battles waged in tenth-century China.

Brimming with odd facts and entertaining curiosities, written with zest and humor, comprehensive and fun to read, Ancient Inventions is a wonderful celebration of the endless inventiveness of the human mind.

2030: The real story of what happens to America byAlbert Brooks

Is this what the future holds?

June 12, 2030 started out like any other day in memory-and by then, memories were long.  Since cancer had been cured fifteen years earlier, America's population was aging rapidly.  That sounds like good news, but consider this: millions of baby boomers, with a big natural predator picked off, were sucking dry benefits and resources that were never meant to hold them into their eighties and beyond.  Young people around the country simmered with resentment toward "the olds" and anger at the treadmill they could never get off of just to maintain their parents' entitlement programs.

But on that June 12th, everything changed: a massive earthquake devastated Los Angeles, and the government, always teetering on the edge of bankruptcy, was unable to respond.

The fallout from the earthquake sets in motion a sweeping novel of ideas that pits national hope for the future against assurances from the past and is peopled by a memorable cast of refugees and billionaires, presidents and revolutionaries, all struggling to find their way.  In 2030, the author's all-too-believable imagining of where today's challenges could lead us tomorrow makes gripping and thought-provoking reading.

Originally published in 1888, Looking Backward is Edward Bellamy's most famous work. The story revolves around Julian West, a man who falls asleep near the end of the 19th century and wakes up in the year 2000. During the time he slept, the United States became a socialist utopia. The majority of the book is a vehicle for Bellamy to expound upon his ideas about societal improvement. Americans in his year 2000 work fewer hours, retire early, and receive all they need from the government. Entertaining and oddly prophetic in some ways, Bellamy''s vision of the future from the perspective of the late 19th century is highly engaging.
Email ThisBlogThis!Share to TwitterShare to FacebookShare to Pinterest
Posted by Jessica Strider at 16:55

Labels: If I had all the time in the world, to be read pile