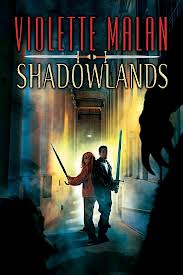 The newly healed former Hound Stormwolf is sent to the Shadowlands to proclaim the new High Prince to those living outside the Lands.  He's set himself another task though, to see that his former Pack is also healed and given new lives.

Valory Martin is a human psychic with astonishing abilities, able to see the truth of people and things by touching them.  Alejandro, long an inhabitant of the Shadowlands rescued her from the Collector and now considers it his duty to protect and help her.  Though he trusts her ability to read truth, he doubts her assertions regarding Stormwolf and the truth of the Rider's message.

The Hunt is still abroad in the Shadowlands, feeding on the dra'aj of humans, an act that has, over time, created a group of humans who call themselves Outsiders.  Without dra'aj of their own, these humans require the dra'aj of others and have created a system for aquiring it.  A system that the new Hound attacks, and subsequent influx of needy humans, threatens to destroy.  The leader of the Outsiders in Toronto, Nikolas, asks Valory and Alejandro to help them deal with the threat of the Hounds.

Meanwhile, the High Prince is caught up in the healing of the Lands, a task more time consuming and difficult than expected, when the Basilisk's followers refuse to yield.

A direct sequel to her first novel, Mirror Prince, Shadowlands will not disappoint those who have long awaited seeing what happened to the High Prince.  While the book takes place primarily on Earth (the Shadowlands), enough happens in the Lands to satisfy curiosity of what Max and Cassandra did after the events of Mirror Prince.

Anyone who's forgotten what happened in Mirror Prince - or who hasn't read it -  will find the first few chapters seemlessly include enough of the backstory, as well as the necessary terminology, to understand what's going on.  Still, it is a direct sequel and readers will definitely get more out of this book, especially with regards to minor characters like Lightborn, if they've read the first book.

The world building is fantastic.  Malan's attention to detail really brings the different settings to life. Many questions about the Hunt, the Horn and the Shadowlands are answered.  It's shown that even with a High Prince and an attempt at more harmony between the races in the Lands (the People, the Solitaries and the Naturals), there is racism and subsequent tensions among the People (those we would call the 'fairy folk').  Even without the Basilisk Prince's followers to contend with, issues between Wards (Sunward, Moonward and Starward) become problematic.  It's easy to understand how humans, considered myths by many in the Lands, wouldn't rate any concern for the People struggling to put their own world to rights.

Valory's power is really interesting, and Malan makes sure her protagonist is no Mary Sue.  She's learned to keep secrets (since no one can keep them from her) and suffers upon entering the Lands, which limits her usefulness to her companions, and her options.

The other characters are equally compelling, with both good and bad traits and their own motivations for their actions.  A few times, generally with minor characters, the motives of the characters are left unclear (more on this in the spoiler section).  And though I liked most of the characters, I didn't feel a deep connection with any of them, making several deaths less dramatic - and impactful - than I like.

This is a worthy successor to Mirror Prince, with a series of interconnecting plot threads weaving through the Lands and Shadowlands and ending with a conclusion that ties most things together neatly while still leaving room for another novel.

Just to clarify my motivation point for those who have read the book - or don't intend to.  The biggest example of this is when Wolf and Valory visit Ice Tor.  While I understand why the two principle characters were willing to give up a finger each to create a new Horn, why was Ice Tor?  What did he get out of this?  It seemed odd to me that he would spend his time and give quite literally of himself, with no benefit to himself.

As a lesser example, there were times when Nik seemed to waffle between wanting the Riders help and not, and I wasn't clear why he was waffling on this when he and the other Outsiders had no means of dealing with the Hunt.
Email ThisBlogThis!Share to TwitterShare to FacebookShare to Pinterest
Posted by Jessica Strider at 10:28