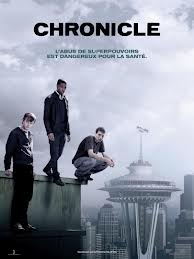 Chronicle tells the story of 3 boys who stumble across a mysterious object in a hole in the ground at a party.  They soon discover they've gained special powers and play around with them.  As time passes, Andrew (Dane DeHaan), whose mother is sick and father is abusive, starts to use his powers for selfish gains.

This film is shot entirely with hand held cameras, most of the time by Andrew Detmer, and later with a few shots from security cameras and the camera of a female friend of one of the boys.  In other words, get ready for a lot of shaky cam.  At times this made the story telling feel forced, as how often does someone film every moment of their lives?  Yes, there are cuts, but Andrew still manages to film himself running, going to bed, etc. etc.  This was especially noticable with the girlfriend, who also seemed to film every day of her life, when they needed a scene where Andrew wasn't present.

The characters developed their powers pretty quickly, going from moving small objects to flying in a remarkably short amount of time.  It was also surprising that no attempt was made to find out what the object was that gave them their powers.

While Andrew is portrayed as a sympathetic character, he had a sick mother, a selfish and abusive father, had trouble fitting in and making friends, had trouble with girls, etc. I still didn't like him.  His personality was very grating.

The ending had some great special effects and reminded me of Akira, with one friend pitted against the other.  It was by far the best part of the movie.

If you like films with reluctant heroes or kids developming super powers, check this out.

Honestly, if I were an unhappy kid who was regularly picked on in school, abused by an alcoholic father, while watching my mother die before my young eyes; I'd probably lose it too. I thought it was awesome when Andrew, Steve, and Matt took off flying at mock 2, that’s where you would find me if I had their powers. I took my job at Dish due to the amount of travel that is required because I love to fly. The hand held camera angle is the best part of the film; this is unique in relation to other movies out today. Chronicle was awesome; I want to see it again. I will be traveling, so I’ll use Dish Online since I’ll have my laptop; having some entertainment during my layover in Chicago is always welcome. Even through Andrew loses it completely in the end, I can’t believe he strikes Steve down with lightening so early in the film; I liked that guy.