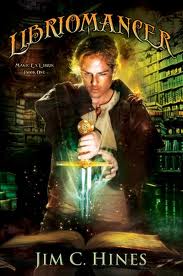 Cons: conflicted 'romance', Isaac makes life hard for himself, Gutenburg is too powerful

Isaac Vainio is a Libriomancer, able to pull objects out of books.  Due to a mistake two years ago, he's been taken off of active Porter duty and now works at a library, forbidden to use his magic.  That changes when three vampires attack him at work.  Only the arrival of a powerful dryad, Lena, saves him and together they must figure out why the vampires are attacking and what's happening to the Porters, several of whom have recently been killed or kidnapped.

The premise of magic that allows certain people to pull objects from books is fantastic.  I liked how the magic was described and that there were rules that dictated its use and real limits to what you could do with it.  I also liked the idea that some items were too dangerous to use, so their books are locked.

Both Isaac and Lena are interesting characters.  I liked that Lena wasn't tall and thin, as dryad's are generally portrayed, but that she was very powerful both physically and magically.  I thought her back story was tragic and her way of dealing with it refreshing (I can't change who/what I am so I'll just live with it).

As for Isaac, it's complicated.  I liked the fact that he's not perfect.  He takes things too far at times, pushing himself and others farther than seems prudent, but accepting the consequences of his actions.  He's a sensitive guy, questioning whether a relationship with Lena would work or is even moral given her circumstances.  He discovers hidden abilities of magic and somehow survives quite a number of dangerous situations.  The complicated part is that, by taking things too far in every encounter, you start to wonder how he's still alive.  He narrowly escapes death several times in this book alone and are given to understand he acted similarly two years ago, prompting his removal from the active Porter duty.

Talking about the negatives of a book is difficult without giving spoilers so I've put more detailed responses below.  I found the potential romance between Lena and Isaac difficult.  I wanted to root for them becoming a couple, but Lena's backstory - and Isaac's reaction to it - made that hard.  I felt that Isaac dwelled too long on her backstory given the choices she makes in the book.

I also felt that Gutenberg, when we finally meet him, is simply too powerful and not held accountable for any of the things Isaac discovers about him (in this book - I'm hoping some of the questions regarding his power and accountability are brought up in book 2).

As a reader who doesn't care much for urban fantasy, I found this book refreshing in some ways.  The focus wasn't on the romance (which was a bit of a catch 22 here), and the magic use was unique.  I've really found myself conflicted over this book, not quite sure where I stand on it.  What I liked about it I liked a lot.  What I didn't like about it really bothered me to the point that I can't stop thinking about the book and the choices the characters made.

Let's talk about the 'romance'.  Lena's backstory is that she's a magical entity and part of her magical make-up is to become the perfect lover for whoever she's with.  Once he learns this, Isaac wonders if, by accepting her as a lover, he's denying her free will.  By the time he's solved this dilema to his satisfaction it's a moot point as her previous lover's reentered the story.

First, when her lover disappeared Lena made a choice.  She knows she'll become the perfect lover of whoever 'takes' her, so she DECIDES FOR HERSELF who she wants her next lover to be.  Note, part of her magic states that she must have a lover, so if she's to exert any power over her own fate she has to decide fast.  And she does.  She immediately chooses Isaac and seeks him out.

When thinking about her situation Isaac never considers that she has made a choice.  The only thing he needs to decide is whether he can be part of a long term relationship.  He can deny her or accept her.  And it is an important decision as it will affect the rest of his life.  But anything else is him trying to mess with the one decision she's able to make in her circumstances.  His agonizing over whether he'd be taking advantage of her if he sleeps with her lessens the importance of the decision she has already made for herself.

While I liked the final conclusion of this love triangle, Isaac joined in rather quickly.  This didn't fit with his earlier waffling over the complex issue.  His obvious discomfort seeing Lena with Shah shows that he should have taken a few days to think things over before deciding.  Given how things ended here, I have trouble picturing a happy relationship between the three of them.

Going to another part of the book, when Isaac wakes up in the house of his Porter boss to the news that they're retiring him again because what he's doing is making things worse, his response is to quit.  Despite believing him a loose canon, his boss lets him go.  What?  Why?  He doesn't agree to not use magic (and indeed, uses quite a lot of it over the next day or so), nor does he agree to stop looking for the bad guy.  And yet they just let him walk out to continue the investigation they're afraid is making the vampires angrier and causing more problems.

Jumping to the end of the novel, I found Gutenberg way too powerful.  Yes, he had limitations, but look at what he was capable of; picking up a book and automatically pulling out what he needed without looking at the title or the page, siphoning magic from other objects (Smudge, his Automatons) in order to perform spells, etc.  He also seems to have no regards for the limits the other Libriomancers work under, for example putting magic items away asap (he gives Isaac a suit from a book, knowing he'll have to wear it for some time).  Even before Gutenberg woke up I was thinking that Isaac should probably drain his magic.  Someone who's willing to wipe minds and lock people in books and automatons on his own authority is a very dangerous person indeed.  And yet, somehow he's shown to be a decent person - stopping the war with the Vampires, etc.  As if his previous crimes don't matter.  And no mention is made of Isaac wanting to make him accountable in the future, if not for the things he's done in the past.
Email ThisBlogThis!Share to TwitterShare to FacebookShare to Pinterest
Posted by Jessica Strider at 12:00

Not to spoil your spoilers, but you do make some good points. I am curious how the second book will tackle them.