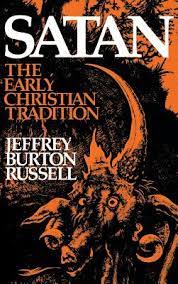 This is the second in a series of books on the evolution of the devil in Christian thought, following The Devil: Perceptions of Evil from Antiquity to Primitive Christianity (reviewed here). There are 8 chapters: The Devil, The Apostolic Fathers, The Apologetic Fathers and the Gnostics, Human Sin and Redemption: Irenaeus and Tertullian, Mercy and Damnation: the Alexandrians, Dualism and the Desert, Satan and Saint Augustine, Conclusion: Satan Today. There is also an essay on the sources used by Russell.

Given that each group of theologians built on what came before, the book contains a lot of repetition. Several later authors expanded on Origen’s theory of the cosmos and redemption before it was declared heretical. Russell does a good job of explaining sometimes convoluted mythologies (like those of the Gnostics and Manicheans) so that you can see how their beliefs coloured that of Orthodox Christians.

Each chapter deals with a stage in the development of Christianity, including how the believers at that period understood Creation, the Fall (of angels and mankind), and Redemption (whether through Christ’s sacrifice or via tricking the Devil). It’s interesting to read the various theories and how they shifted and grew over time into the ideas we’re familiar with today.

While it’s an older book, first published in 1981, the scholarship is solid, with then current references and a lot of page notes explaining certain concepts in more detail.

If you’re interested in the development of the devil and hell, how theological discourse changes over time, or simply in the history of Christianity as a whole, this is an interesting read.
Email ThisBlogThis!Share to TwitterShare to FacebookShare to Pinterest
Posted by Jessica Strider at 10:13