Book Review: Carved From Stone and Dream by T. Frohock 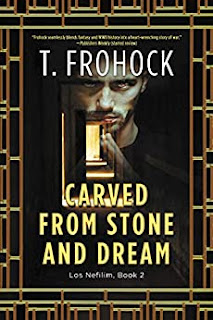 Cons: scenes of torture some may find disturbing

It is 1939 and the Spanish Civil War has gone poorly for the Republicans, backed by los Nefilim. With his wife and daughter, heir to his crown, sent to Paris in advance, Don Guillarmo is pursued by Nationalist forces while crossing the Pyrenees. A betrayal alerts him to the existence of a pocket realm where his brother Jordi, backing the Nationalists, is helping the Germans plan an invasion of France.

While this is technically the second in a trilogy (following 3 novellas), the book is designed to stand on its own. There’s enough background information to jump in here, but I do feel you won’t get the same emotional kick if you aren’t aware of the relationship between Diego, Miquel and Raphael.

The book cleverly ties the Nefilim (offspring of angels and demons) into the history of the Spanish Civil War and the coming second world war. There’s a bibliography at the back of the book that shows the author’s done their research regarding the period and how LGBT characters fit in historically, while also allowing readers to expand their own knowledge if they’d like to learn more.

The book gets very tense at times, with depictions of torture. Though horrible things happen, it never felt gratuitous. The story is fast paced, with several point of view characters, so the horror is never overpowering.

The book really shines with its family relationships. The love Diego and Miquel have for each other, and their desire to help each other through difficult circumstances shines through. I also liked seeing Raphael become a young man, making mistakes and learning hard lessons.

The Grigori was horrifying and I can’t wait to learn more about it and the other fallen angels.

I’m really enjoying this series and look forward to the final volume.
Email ThisBlogThis!Share to TwitterShare to FacebookShare to Pinterest
Posted by Jessica Strider at 18:05