Sorry for the lack of reviews lately. I've been busy with non-fiction books and just finished rereading Medusa Uploaded so I can start Medusa in the Graveyard. I've also been going through my photos from Spain and hope to post about my trip next week.

Many thanks as always to the publishers that give me advance review copies.

The Master of Dreams by Mike Resnick - Unfortunately I started this one and quickly realized it wasn't for me. That happens a lot with urban fantasy. I still think the premise sounds cool. 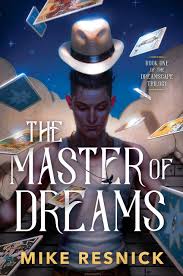 Eddie Raven isn't quite sure what's happening to him--and he's in a race to find out before it kills him.

His adventures begin with a shooting in a very strange shop in Manhattan--but soon he finds himself the owner of a very familiar bar in Casablanca. By the time he adjusts to that reality, he's suddenly become one of several undersized people helping a young woman search for a wizard. And after confronting the wizard, he somehow finds himself in Camelot.

But as he rushes to solve the mystery of his many appearances, a larger threat looms. Because someone or something is stalking him through time and space with deadly intent.... 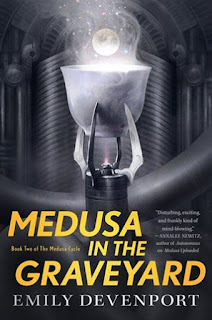 Medusa in the Graveyard by Emily Devenport - Though this is out July 23rd, I've been looking forward to it since I first finished Medusa Uploaded, so it jumped to the top of my to read pile. I'm only a few chapters in but I'm loving it.

Oichi Angelis, former Worm, along with her fellow insurgents on the generation starship Olympia, head deeper into the Charon System for the planet called Graveyard.

Ancient, sentient, alien starships wait for them-three colossi so powerful they remain aware even in self-imposed sleep. The race that made the Three are dead, but Oichi's people were engineered with this ancient DNA.

A delegation from Olympia must journey to the heart of Graveyard and be judged by the Three. Before they're done, they will discover that weapons are the least of what the ships have to offer.


Book of Beasts: The Bestiary in the Medieval World Edited by Elizabeth Morrison with Larisa Grollemond - I love medieval bestiaries so I'm stoked to get to read this before it comes out on June 4th. I wish I could see the museum exhibit it accompanies. 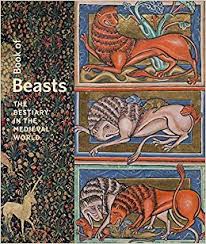 A celebration of the visual contributions of the bestiary—one of the most popular types of illuminated books during the Middle Ages—and an exploration of its lasting legacy. Brimming with lively animals both real and fantastic, the bestiary was one of the great illuminated manuscript traditions of the Middle Ages. Encompassing imaginary creatures such as the unicorn, siren, and griffin; exotic beasts including the tiger, elephant, and ape; as well as animals native to Europe like the beaver, dog, and hedgehog, the bestiary is a vibrant testimony to the medieval understanding of animals and their role in the world. So iconic were the stories and images of the bestiary that its beasts essentially escaped from the pages, appearing in a wide variety of manuscripts and other objects, including tapestries, ivories, metalwork, and sculpture

With over 270 color illustrations and contributions by twenty-five leading scholars, this gorgeous volume explores the bestiary and its widespread influence on medieval art and culture as well as on modern and contemporary artists like Pablo Picasso and Damien Hirst.

Published to accompany an exhibition on view at the J. Paul Getty Museum at the Getty Center May 14 to August 18, 2019.