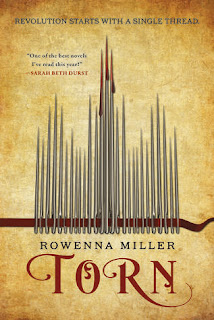 Sophie Balstrade’s unique skill of sewing charms into garments has given her shop steady business, but she’s hoping to catch the eye of noble ladies. She’s overjoyed to receive a commission from Viola Snowmont as well as an invitation to the lady’s salon, both of which propel her into a higher class of clientele and a potential love affair. But her brother’s a leader in the Laborer’s League, and as tensions build among the disaffected lower classes, she finds herself torn between his goals and her own. When he disappears, she’s blackmailed into helping the League by doing something against her moral code - sew a cursed object.

I really enjoyed this book. While I wouldn’t say it’s cribbed from the French Revolution, the salons, the court fashions, the presence of guns and the social tensions did remind me of that period of history.

I loved Sophie, especially the fact that she actually works at her shop and when she takes time off she either has to make up the work later or rearrange the schedule so everything is done on time. I appreciated that she had goals and that she’d considered the consequences of marriage (her husband and his family would gain control of her shop) and decided it wasn’t for her.

The romance thread was slow paced, which I appreciated. The couple actually talked about the realities of their situation and acknowledged that due to their stations things could only go so far.

The magic - attaching charms via thread into garments - was very original. Sophie has to learn how to do curses and there's a physical cost to her for doing them.

There was just enough of the politics to keep things interesting without slowing the pacing. Through Sophie we see that the nobility have duties to perform and that their lives aren’t all given to leisure, while the workers have legitimate grievances.

This is a fun read and I’m looking forward to the sequel.
Email ThisBlogThis!Share to TwitterShare to FacebookShare to Pinterest
Posted by Jessica Strider at 09:53