Shout-Out: How to Sell Your Family to the Aliens by Paul Noth

One thing still lacking in SF are a lot of good middle grade books to get kids between the ages of 8 and 12 interested in the genre. While I haven't read this, it sounds hilarious. 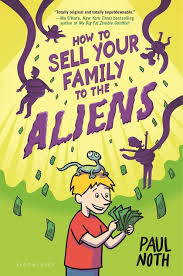 Happy Conklin Jr. is the only 10-year-old who has to shave three times a day. Hap's dad is a brilliant inventor of screwball products, and being a Conklin kid means sometimes being experimented on. So Hap has his beard, and his five sisters each have their own unique--and often problematic--qualities too. And although Hap's dad has made a fortune with his wacky inventions sold via nonstop TV infomercials, all of that money has gone to Hap's tyrannical Grandma. While she lives in an enormous mansion, the rest of the family lives in two rooms in the basement.

All Hap has ever wanted is to have a normal life, so when he sees a chance to get rid of Grandma, he takes it! He only means to swap out Grandma, but when he--oops!--sells his whole family to the aliens, he wants nothing more than to get them back. He just has to figure out . . . how?