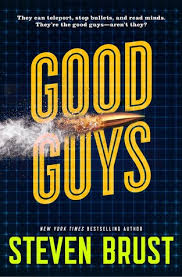 Donovan, Marci and Susan work minimum wage for the Foundation’s North American division of Investigations and Enforcement. Their job is to keep the public from learning about the existence of magic by tracking down sorcerers who use magic to commit crimes. When members of their opposition organization, the Mystici, start dying in a mix of what might be magical or mundane means, the three investigate. But if the killer is going after horrible people, does stopping the murders really make them the good guys?

While I loved the premise, I found the execution disappointing. What interested me about the story was the dramatic recruitment story of Donovan, told on the dust jacket and the moral complexities of stopping a killer whose targets you agree should probably die. Instead of starting with a prologue of Donovan’s recruitment or showing it in a first person flashback, the author simply plops it into a rather dry conversation, stripping it of all emotion and impact. And when Donovan questions early on if what they’re doing makes them the good guys, you don’t know the characters well enough or understand the full context of the case, or the history of the Foundation, to even begin to have an opinion. Considering how much about the Foundation and the people working there that Donovan learns about during this case, it seems he doesn’t even know enough about who he’s working for to know if he’s on the right side (which to me sound like the kinds of things to question/learn about before you agree to work for them).

I know I’m getting older because I have a lot of trouble keeping names straight in books nowadays. And having most people go by first names until the end of the book when someone randomly used their last names, threw me. I had to look everyone’s full name to figure out who was being addressed.

The characters were all interesting. Donovan’s really clever and I liked seeing him make intuitive leaps (even if I couldn’t always follow them). Seeing how he navigates a racist world was also interesting. I did question his decision to bring suspects to his apartment for interrogation and then just let them go. Seemed a stupid thing to do. Susan was probably my favourite character, being skilled at martial arts and otherwise kind of quirky. Marci felt a bit overpowered as a sorceress, though she does have a refraction period she has to wait between casting more powerful spells.

The world-building was ok. I didn’t quite understand the split between the Foundation and the Mystici, though I did grasp that their philosophy was different. I didn’t understand why slipwalks would cost so much after the initial preparation for the space. I also didn’t believe the accounting error could be found so quickly.

The ending left me feeling disappointed. There’s a climactic battle that’s completely skipped over, a death that isn’t properly felt, and a resolution with consequences that don’t fit the crimes committed.

The book sounded great, but I wasn’t a fan of the execution.
Email ThisBlogThis!Share to TwitterShare to FacebookShare to Pinterest
Posted by Jessica Strider at 10:07