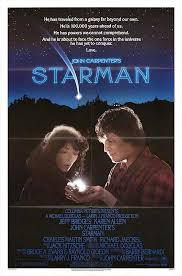 Cons: not sold on the romance, one special effect looks terrible

An alien comes to Earth in response to the Voyager welcome message. Shot down by the military, the alien takes on the form of the deceased Scott Hayden and forces the man’s wife, Jenny Hayden, to drive him to Arizona where he’s supposed to meet up with another ship. All the while being hunted by the military and a SETI agent.

I saw this once as a kid and remembered a lot more of it than I expected. While a few of the special effects didn’t age well (specifically the alien growing from a human baby into Jeff Bridges) most of them were low key and so still carry a bit of wonder to them.

Jeff Bridges does a remarkable job as an alien who can’t walk right, talks with extra clear enunciation, demands explanations of unfamiliar words, and just feels OFF. It’s a challenging role and he sells it completely.

I was impressed how the minimalistic soundtrack ended up emphasizing the theme song - played when the alien uses ‘magic’ or when something sad or touching happens. It’s a masterful piece of conditioning, much like the shark theme in Jaws.

I wasn’t entirely sold on the romance. Everything happens so fast that I have trouble believing Jenny could go from one extreme to the other. Especially considering how child-like the alien is in some ways.

Unfortunately I suspect that if aliens were to visit the Earth this is the treatment they’d get. It’s sad that while we’ve come so far in some ways, we haven’t changed at all in others.

While not a movie I’d watch often, it is worth seeing once. It’s slow moving and character driven, but you really feel for the alien at the end.

Email ThisBlogThis!Share to TwitterShare to FacebookShare to Pinterest
Posted by Jessica Strider at 10:05