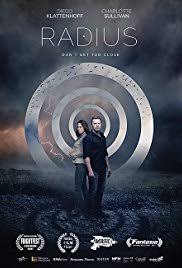 Liam wakes up from a car crash with no memory. As he walks towards town he notices people and animals mysteriously dying and fears he’s in a plague zone. But the truth he discovers is much worse.

I went into this movie knowing nothing about it and I enjoyed it a lot. The SF elements are minor but important, and add to the mystery of what’s happening.

It’s heavily character driven, with Liam (Diego Klattenhoff) trying to figure out what’s going on and then realizing that Jane (Charlotte Sullivan) is just as deeply involved. You can feel their frustration and fear as they struggle to get help while not getting caught by the police. The pacing is good, letting them learn/remember enough to keep things interesting.

My husband and I were left with some questions about how Liam’s … powers… worked, which I’ll mention a bit more in the spoiler section below.

The film kept me guessing and had a satisfying ending.

I wondered whether Liam’s powers were tied to him being alive or whether his body would have the same effect. My husband went a step further and asked if parts of his body would have the same effect as the whole. Could his nail clippings hurt someone? A severed finger? If so, would the range be the same or smaller due to the smaller size of the item? Obviously the film assumed that once he died the power died too (even though hair and nails keep growing for a while after death). This could have had an amazing horror ending by showing people drop dead as Rose got further away from him. But I was satisfied with the ending they used.

I found the ending to be a great twist because you really start to like Liam, so the reveals come as a kick to the gut.
Email ThisBlogThis!Share to TwitterShare to FacebookShare to Pinterest
Posted by Jessica Strider at 10:28