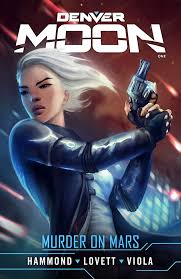 Denver Moon is a private eye investigating a series of prostitute murders on Mars. But is it really murder if the victims are bots?

This is the first of 3 comic books, which will be bound into a graphic novel entitled Metamorphosis later this year. Issue one is currently on comiXology and will be available in print on June 5th. The comic is based on a short story of the same name, which is a prequel to a novella also out on June 5th called Denver Moon: The Minds of Mars.

This issue is purely set-up. You’re introduced to Moon and the case and a bit of the background regarding the state of affairs on Mars. I liked the artwork which has soft edges and an almost painted look. Scenes outside have a definite Blade Runner Asian/neon vibe.

As extras, there’s some concept art for the main characters and the first section of the short story, which retells the same things as the comic, only with some added details. I actually found the comparison fascinating: what physical details needed to be included in the written rather than visual account as well as which details were cut for the comic to save room without compromising story.

This is a great start with an interesting protagonist and setting, and I’m curious to see where it goes.

Email ThisBlogThis!Share to TwitterShare to FacebookShare to Pinterest
Posted by Jessica Strider at 09:16