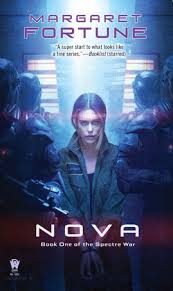 For three years the Celestial Expanse and the Tellurian Alliance have fought over rights to New Earth. Now, there’s a cease-fire accompanied by the good-will release of 500 prisoners of war from the Tellurian prisoner of war camp at Tiersten Colony. Among those being released onto New Sol station is sixteen year old Lia Johansen. But she’s actually a living bomb, set to go off in thirty-six hours.

This is the first book in the Spectre War series, and it’s a doozie. Given the age of the protagonist and her search for meaning after things go wrong, it kind of felt like a YA novel. There’s a touch of romance, coming of age, befriending an enemy… But throughout there’s an undercurrent of something else - the same mystery that Lia’s trying to remember.

I thought the pacing was great, with the book teasing out bits and pieces of the mystery. There was one aspect in particular that I was surprised she didn’t grasp earlier. Yes, she is sixteen and it wouldn’t be easy to work around false memories, but it did frustrate me a bit.

The romance elements were great and gave the ending quite a punch. I liked that Lia developed friendships with several women of various ages. Often books ignore the importance of female friendships to female protagonists, so I really appreciated seeing this.

While the story is self-contained, it opens a lot of future possibilities, and leaves you wanting to know what happens next.
Email ThisBlogThis!Share to TwitterShare to FacebookShare to Pinterest
Posted by Jessica Strider at 10:36