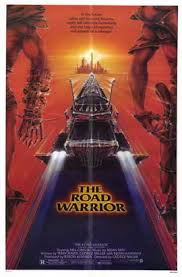 In a post-apocalyptic Australia, scavengers fight over scarce resources, and gasoline is the new gold. Max is a loner who learns of a compound where oil is still being mined and refined. But the compound is under attack from a gang of bandits.

The film begins with a several minute voiceover explaining how the world fell into anarchy, followed by a very quick synopsis of the salient points of the original Mad Max film. Then the action starts, with a car chase and the iconic souped up cars and dune buggies driven by men in fetish gear.

I was impressed by the number of supporting women in the film, including a few fighters.

The costumes were pretty good (I still love Max’s leather get up), and there was a lot of action and a couple of great chase scenes.

Max sports a leg brace in recognition of a wound he received at the end of the original film, which I thought was cool. Another character has his legs bound, making me believe he was paraplegic. Neither is treated as invalids, in fact, if I’m right, the minor character has a role tailor made to get around his disability.

The story is pretty basic, and most of the twists are pretty obvious.

As with the first film, there’s an off screen rape, though this one has more nudity associated with it and so can be triggering.

As an action film, this holds up pretty well. It’s entertaining and atmospheric, so it’s not hard to see why the franchise is being reborn.

Email ThisBlogThis!Share to TwitterShare to FacebookShare to Pinterest
Posted by Jessica Strider at 10:34