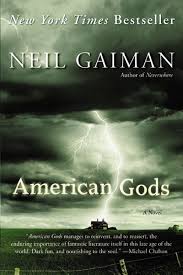 Shadow is days away from being released from prison when bad news lets him out early. A seemingly chance encounter on an airplane with a strange old man leads him to an unexpected job where he meets gods and other creatures of legend, brought over from far lands long, long ago and left stranded in America without believers, without power. A war is brewing between the gods. And Shadow’s become a focal point.

I really liked Shadow as a protagonist. Which is good, because half way through the book I was still wondering what the actual plot was. Shadow was interesting enough to me to push through segments of the book that were kind of boring. I liked his pragmatism. I liked that nothing fazed him.

I enjoyed that the mythology mentioned was earthy, brutal, realistic. These are not your sanitized gods. They live off of blood and sacrifice. And yet I found myself liking a lot of them. I feel very conflicted about that.

The story seems slow because a lot of what’s interesting is happening to Wednesday off page. There’s a section in the middle where Shadow’s just living life while Wednesday is making deals, which, while not boring, wasn’t particularly exciting either. It was filled with interesting characters, and so I kept reading where I otherwise might have given up.

I don’t mind romance in novels or sex scenes, but the ones here were particularly graphic, which isn’t to my liking.

Pay close attention because most characters have more than one name. On several occasions smaller characters returned later in the book and I had to look them up to remember who they were.

I didn’t love this book but I didn’t hate it either. It was interesting enough to keep me reading overall, and there were some interesting takes on mythology that I liked. But I’m not sure I can recommend it to others.
Email ThisBlogThis!Share to TwitterShare to FacebookShare to Pinterest
Posted by Jessica Strider at 10:20