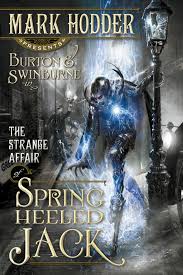 A major assassination has changed the world of 1860s Britain into one with mechanical flying and driving machines and genetically modified bird and dog messengers. Sir Richard Burton, the famous explorer, is called by the prime minister to become an agent of the crown and investigate two cases: werewolves kidnapping chimneysweeps and appearances of an entity called Spring Heeled Jack.

The melding of history and fantasy in this book is fantastic. The book ends with short biographies of the principle characters, but further research showed just how much research went into this book. I loved how the world has changed - adding both biological and mechanical developments. The use of language - especially given Spring Heeled Jack’s unintelligible (to them) speech - and how they interpret his pronouncements, was quite convincing.

The ‘characters’ were all pretty fun, and surprisingly bizarre considering they’re mostly based on real people (which just shows that truth is stranger than fiction).

I personally found the longer descriptions of the steampunk technology kind of boring, but your mileage may vary.

There’s a long section where you finally learn all about Spring Heeled Jack by way of the main antagonist telling it to a group of peers in a place where Burton can overhear it. Seems to me this story would have been told long ago, like when everyone joined together in the first place. In the author’s defence, I’m not sure how else all of this information could have been relayed to Burton, though he seemed to figure out enough of what was going on that a full reveal to him wasn’t really necessary, and readers could have kept the flashback scenes from ‘Jack’s’ point of view.

One of the antagonists is called an albino, though he isn’t really one once you learn his background. It’s annoying just in that albinos are often made into bad guys for no reason other than their looks.

On the whole this was an entertaining novel with a decent mystery. It’s a cool period of history to examine and it’s fascinating the changes one death can make.
Email ThisBlogThis!Share to TwitterShare to FacebookShare to Pinterest
Posted by Jessica Strider at 10:19