Peter V. Brett's fifth and final Demon Cycle book has a name (The Core), covers (with an interesting creation story for how the US and UK covers were designed), and a release date (October 3, 2017 - pushed back from August). 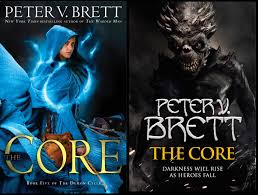 When I worked at the World's Biggest Bookstore, I often went to publisher run bookseller events. SFF wasn't often represented, outside of YA. The Warded Man was the first adult Random House title I was mailed outside of an event, because I specialized in SFF at the store and they wanted to promote the book. So it has a special place in my heart beyond simply being an incredible debut. In 2009, a few months after it came out in the US/Canada I interviewed Mr. Brett, asking questions about the writer life. A few years later, while handselling book two, The Desert Spear, I opened the book and realized my review of it was quoted in the front! For some reason publishers don't notify reviewers when they do this so it was a complete surprise and only one of two instances (that I know of) that this has happened to me.

About a month ago I noticed that Peter V. Brett was hosting a still life contest on his blog. I'd intended to enter and then completely forgot about it. Well, yesterday I saw a twitter post with some of the entries and decided to do it anyway, even though the contest is over now.

Here's what I came up with: 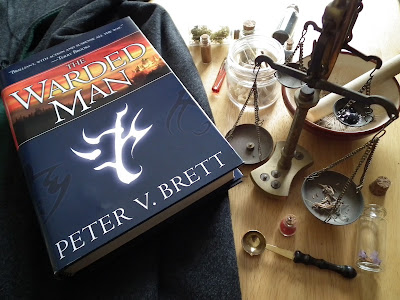 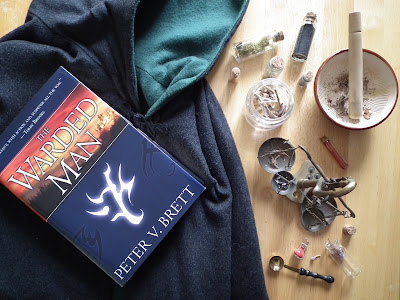 I think the first shot is better, as it shows the scales and other objects closer and at an angle, but I like that you can see that the cloth is a cloak in the second shot. My idea behind this was that Leesha had just entered her hut, thrown her cloak down and was frantically preparing an herbal remedy for a patient (hence the knocked over bottles).

This second scene isn't as detailed (and yes, the hora should be bone not crystal, and warded to boot), but I wanted to do something to honour Inevera, one of my all time favourite characters. 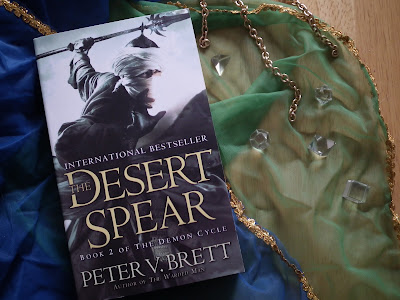 Email ThisBlogThis!Share to TwitterShare to FacebookShare to Pinterest
Posted by Jessica Strider at 09:32