Movie Review: Get Out 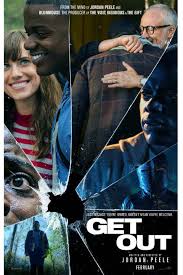 Rose Armitage is bringing her new African American boyfriend, Chris, home to meet her caucasian family. They seem nice, if overeager to prove they’re not racist, but as the weekend progresses, something just feels more and more off to Chris.

I remember a few years ago Cabin in the Woods got a lot of praise for taking horror movie tropes and turning them upside down. Get Out ignores the tropes completely and creates a subtle atmosphere of unease and a truly horrifying reveal. I’m surprised more people aren’t talking about this film, as its reversal of stereotypes makes it unique.

There’s very little blood and gore, depending instead almost entirely on creeping you out in a more psychological way.

I thought the performances were excellent. Daniel Kaluuya as Chris really sold what was going on and his own confusion and uneasiness over seemingly benign encounters. Allison Williams as Rose was also great, especially in the second half of the film. Marcus Henderson (Walter) and Betty Gabriel (Georgina) were amazing. They had to show no emotion for most of the film and the moment when Georgina cries was heart-wrenching.

There’s an underpinning of subtle racism that adds to the horror. Seeing situations from Chris’s point of view it’s hard to ignore the subtext of what’s being said and done, from the cop asking to see his ID to the guests at the party bringing up their ‘black’ connections.

As someone who prefers psychological horror over body/slasher horror, this was terrifying and provocative. It’s highly worth seeing.

If you have seen the film and want a fantastic breakdown of what's going on, Wisecrack's got you covered.

Email ThisBlogThis!Share to TwitterShare to FacebookShare to Pinterest
Posted by Jessica Strider at 11:34