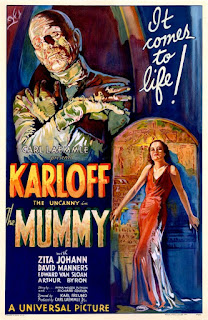 In 1922 an archaeological expedition in Egypt dug up the unusual mummy of Imhotep and a strange box containing a scroll. Both disappear. Ten years later, a new expedition discovers the untouched tomb of a priestess of Isis, whose spirit, Imhotep discovers, is possessing a modern young woman.

My understanding of this film was that it consisted of a mummy in torn and tattered bandages, roaming around killing people. So I found the film quite surprising. The mummy I expected only shows up in the first few minutes of the film, after which Imhotep (well played by Boris Karloff) appears as a wizened man.

Imhotep isn’t awakened via a spoken spell, so he was either alive in some form this whole time, the spell was uttered inaudibly, or writing out a small portion of it is enough to enact it. I actually found the magic spells Imhotep uses later in the film interesting, though not likely authentic (in terms of language or how ancient Egyptians thought of magic). The make-up and costumes were excellent. The film used white actors for the important Egyptians, and black ‘Nubians’ as servants, though Ancient Egyptians would not necessarily look like their modern inhabitants (Egypt was conquered and settled by several nations in ancient and medieval times).

Helen’s ‘illness’ reminded me of Lucy (and later Mina) from Dracula, something that was supernaturally called by the antagonist that saw her wasting away due to her attempts to avoid the summons.

There’s a rather sudden romance, which felt kind of out of place given what’s going on and how little the characters know of each other. The fact that Helen (Zita Johann) even points this out, just made it worse as Frank ignores her concerns.  David Manners as Frank Whemple didn’t impress me much as the love interest (there was no chemistry between the couple and no time to develop any relationship), nor did the wise doctor Muller, played by Edward Van Sloan. Both were fairly wooden, and the doctor’s constant expositionary leaps of logic as to what’s going on were kind of annoying.

It’s an interesting film, more for its place in history and how inaccurately it’s remembered than because it’s great cinema.

Email ThisBlogThis!Share to TwitterShare to FacebookShare to Pinterest
Posted by Jessica Strider at 10:53