I picked up a container of manjar blanco in Peru and wanted to see how it compared (or if it was the same as) the dulche de leche I got at the local grocery store. Online sources tell me that both are made by boiling milk and adding sugar, so my expectation is that they’ll be pretty similar. 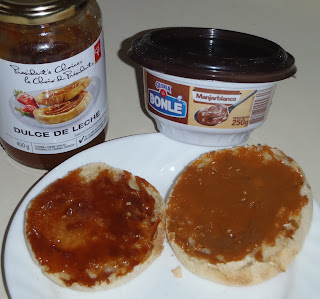 The manjar blanco spreads more like peanut butter and is matt, while the dulche de leche is shiny and spreads thinner, more like jelly.

The taste was like the smell, with one having a more milk flavour and the other a richer caramel taste. It's strange that foods that are so similar can turn out so different.

So why am I mentioning this on my SFF blog? Because it's easy to forget when creating new worlds just how many minute differences between communities there are. There's this idea that everyone in your city or country or planet speaks the same, eats the same, worships the same. A great way to make your world feel real is to have characters point out that the food isn't quite the way they do it back home - spicier, richer tasting, more watery, fewer ingredients, etc.

Food is a comfort. It reminds us of home and - hopefully - safety and love. And people complain about it all they time. They also praise it when it's exceptional and comment on it when it's unexpected. New foods when travelling can be an adventure all they're own, and when we're done travelling, they can also remind us of the places we've been, the things we've done and the people we've met. As such, it could be a great way to start a sequel, having a protagonist eating a dish that reminds them of the events of the previous book. The meal doesn't have to go uninterrupted of course.
Email ThisBlogThis!Share to TwitterShare to FacebookShare to Pinterest
Posted by Jessica Strider at 11:58