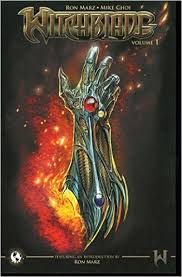 Cons: too many questions, anti-climactic ending

NYC Detective Sara Pezzini is in a coma. When she wakes up she doesn’t remember what happened to her, but she intends to find out.

According to the back cover, this is a reinvention of the Witchblade comic and was meant to help introduce new readers to the world. It collects issues 80 - 85. As the only Witchblade comic I’ve read, I’m not sure it succeeds.

The graphic novel asks a lot of questions and teases a lot of answers, but doesn’t tell you much. There’s a mystic Asian man who know stuff but won’t say anything. Sara also knows stuff but only gives a very brief and basic explanation of what the Witchblade is and how she got it, right before the final battle. There’s so much talking around what the reader wants to know that it becomes quite frustrating at times.

The main plot doesn’t make much sense either. There are priests who’ve spent hundreds of years planning for something, who don’t seem to have really considered what their plan means. I’d expected their creature to turn on them, which it might have done, given more time.

The climactic battle was a let down, the creature being defeated remarkably fast.

The artwork, however, was stunning. Beautiful frames full of motion. I loved how each frame with the Witchblade showed it growing, and how it completely covers Sara at the end.

I liked the concept and loved the artwork, but the story didn’t impress me.
Email ThisBlogThis!Share to TwitterShare to FacebookShare to Pinterest
Posted by Jessica Strider at 10:18