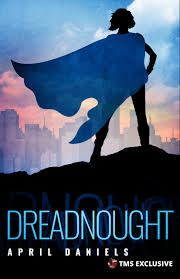 When the superhero Dreadnought dies in front of Danny, he gives the teen his mantel, which changes Danny’s body from male to female. Now in the body she’s always wanted, Danny’s never been happier, though she feels guilty about how she got it. Her new body also causes her new problems, as her parents and schoolmates finally see the real her, and not everyone’s happy with her transition. The superhero community is different from what Danny’s always believed, and she faces several difficult choices - including whether to go after the supervillain who killed Dreadnought.

The book deals with several complex issues, not the least of which is Danny’s gender transition. I appreciated that the author didn’t pull punches, and showed Danny’s conflicted emotions and real consequences for both long term and short term actions.

It was great seeing a transgender protagonist, and the author showed how difficult things are: from coming out to friends and family, dealing with opposition, and learning to feel good in your skin. I especially appreciated the scenes where Danny learns about make-up and gets her first bra. While the book didn’t make me cry, I did feel for Danny on multiple occasions and was frankly shocked by a lot of the things that happened.

While Dreadnought is described as being invincible - his death notwithstanding, Danny quickly realizes she has limitations and can still feel pain and hurt herself. So there was tension and actual concern during fights that things might not go well for her.

I also appreciated that there was no romance in the book. There were times I thought the author was heading in that direction, but Danny had so much to deal with already, I think a love interest would have been too much. Having said that, I wouldn’t mind seeing a romance develop in later books.

The world-building is quite good, with some basic history into where super humans come from and how they’ve impacted recent history. While you don’t learn everyone’s backstories, some of them - specifically Calamity’s - are very realistic. Others are brushed off as comic book style transformations (specifically ones dealing with mythological or mystical origins).

The plot is great. while I saw one or two of the complications that cropped up, I was blindsided by most of the plot twists. The mystery of Utopia’s identity kept me guessing, and I enjoyed seeing Calamity teach Danny the ropes of ‘caping’.

I had a few minor complaints, like Danny’s insistence that her best friend would come around to her new body quickly. Considering the fact that Danny didn’t feel she could share that she was transgender with him, something about her friend must have tipped her off to the fact that she couldn’t trust him with the news.

I also had trouble picturing the action in some of the airplane rescue scenes, though the author did a great job explaining Danny’s powers in other scenes.

This is a fantastic debut and I’m really looking forward to seeing how the series progresses.
Email ThisBlogThis!Share to TwitterShare to FacebookShare to Pinterest
Posted by Jessica Strider at 10:35