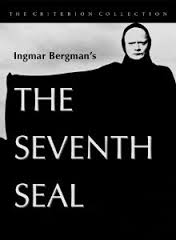 Cons: boring at times, the squire threatens a woman into joining him

A knight, returned home from the crusades, plays chess with the personification of Death to give himself time to find out if God is real. On his way home he passes through villages terrified of the plague.

This is a black and white film that looks absolutely stunning. Bergman made great use of light and darkness to create different atmospheres during the film. The scene with the flagellants is disturbing, while scenes with the actors Jof and Mia are full of hope and love. I loved Death’s design, the white face with a black cape and gloves. It evokes a skull without the gothic overtones and thus avoids feeling overdramatic. Instead, the human face seems terrifying, as we see throughout the film how humans treat each other in the face of death.

The acting was quite good, and the costumes looked amazing. I’d argue the historical accuracy of this film is better than most of what’s made nowadays, despite our better understanding of the medieval period.

For the most part I liked the squire, but there’s one scene where he helps a woman and then basically forces her to come with him because he ‘saved her life’. That’s not to say it isn’t a realistic scene, it just made me like the squire a whole lot less.

The opening is a bit slow and a few parts seemed to meander, but on the whole it was a good movie.
Email ThisBlogThis!Share to TwitterShare to FacebookShare to Pinterest
Posted by Jessica Strider at 10:29