Book Review: The Testament of Jessie Lamb by Jane Rogers 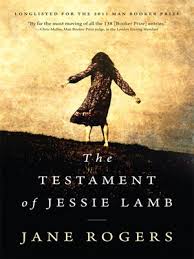 A disease targeted at pregnant women causes horror and despondence. Sixteen year old Jessie Lamb finds purpose in one of the schemes to save the future.

The book alternates between a week where Jessie is locked up in the present and what in the past brought her to this point. It’s interesting trying to figure out how the world has changed due to the disease, but also to understand who locked her up and why.

Jessie is a teen trying to find her place in a world that’s quickly falling apart. She has a strong feeling that her self-sacrifice can save the world, regardless of how much evidence to the contrary her parents raise.

While I liked her as a character, as an adult who remembers similar feelings as a teen, and who lived past that fatalistic period of her life, I know her parents are right and that even a year could bring important break throughs that would make her sacrifice unnecessary. The second half of the book was agony to read, as I knew what Jessie was going to do and was horrified by her decision. I kept thinking that she’s made this decision and will not be the one around to face the consequences of it. But she believed and insisted that everyone around her - who would have to live with the aftermath - should be happy about what she’s doing, even though they all tell her they are horrified by what she’s doing and ask her not to do it.

I also kept wondering why, when IVF treatment can easily be used for multiple births, the doctors would use these young women’s lives for single births. Maybe the fear was that multiple births would be more likely to fail, but a one to one ratio won’t solve any problems, and just reduces the already problematically low numbers of young women.

The characters on the whole were complex, reacting to what’s happened in different ways based on their personalities. I liked how Jessie’s relationships changed over time. I also liked how nuanced her parents’ marriage was.

The world-building was excellent, showing how society slowly starts falling apart, how men and women of different ages and relationships handle the death of so many women and the knowledge that becoming pregnant is a death sentence.

While I didn’t like the ending and Jessie started to drive me nuts, it was an interesting novel.

Something that occurred to me after I’d finished the book was that Jessie was determined in her sacrifice because of her father’s story of willing human sacrifices in the past, that they were treated as heroes and helped their societies. Once he knew what she planned, he should have explained that though those societies believed throwing a woman into a volcano (or whatever) saved them, it didn’t actually do anything. Those deaths didn’t help the world beyond keeping some people in power and convincing their societies that they had appeased gods, etc. But the volcano would still erupt if conditions were right. Weather patterns weren’t changed, crops weren’t any better. Similarly, her single sacrifice - and the child (should it survive) wouldn’t really make a difference to the larger picture, while her life might have made a real difference.

I was also annoyed that the book ended on a positive note, as if everything would be happy and rosy after Jessie’s gone. While I’m not sure if her parents would agree to raise her child, I’m quite certain they’d divorce because of her decision. Their relationship was already rocky and her mum could point to her dad and say - correctly to some extent - that Jessie’s decision was his fault. I’m also not convinced that her sacrifice had any greater meaning. I believe her dad was right in thinking that a year could make a huge difference in terms of finding a cure/other solution to their problems (especially with regards to artificial wombs). Her parents would also have to contend with people accusing them of forcing their daughter to do this - and you know that’s coming - despite Jessie’s testament to the contrary. Because Jessie doesn’t actually explain why she’s doing it beyond that she feels it’s her destiny.

Along the same lines, we’re told that society is doomed because there’s a year or two without births, how will it recover if all their young women kill themselves in some way or another?
Email ThisBlogThis!Share to TwitterShare to FacebookShare to Pinterest
Posted by Jessica Strider at 10:27