Book Review: Out of the Waters by David Drake 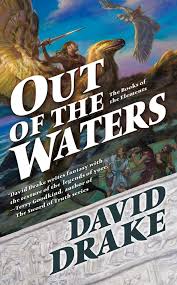 During the mime of Hercules commissioned by Senator Saxa to commemorate his becoming Consul, the special effects suddenly become much better. While the Senator and many in the audience believe the vision they’re seeing is manufactured, Saxa’s children, Varus and Alphena, his third wife Hedia, and Varus’s friend Corylus know it’s a real representation of danger facing their city of Carce.

This is the second Book of the Elements novel, taking place only a short time after the events of book one. While it’s not necessary to have read the first book - enough background is given to bring you up to speed - it is worth it.

Once again I loved the characters and how they interact in this not quite historical Roman empire. Hedia is unable to use her sexuality and poise to advantage when when naked and capture by enemies who don’t care about her rank, but that doesn’t stop her. Her determination is admirable, as is her ability to manipulate those around her. Alphena’s story showed more personal growth, which was great to see. She’s learning that her unbridled anger and petulance aren’t as powerful as Hedia’s weapons, and so tries to emulate her stepmother. Varus shows some growth as well, becoming more self-aware as his powers grow.

Several of the characters again find themselves in alternate worlds, a device that arranges for them to be at the right place at the right time.

I enjoyed the various storylines that formed the plot, and how each principle character played an important role in the ending. I did find the story quite slow though, especially the opening which involved a fair amount of exposition.

The ending surprised me a bit in terms of how unsympathetic the principles were to the Atlantean’s plight. But we’re shown so little of them, and what we see is negative, which I guess is meant to excuse the violence.

As with the first book the historical setting is great with some wonderful protagonists. While the story is slow, it has a satisfying ending.
Email ThisBlogThis!Share to TwitterShare to FacebookShare to Pinterest
Posted by Jessica Strider at 10:36