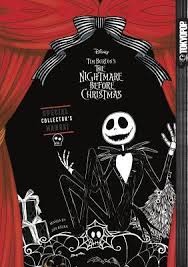 Jack Skellington, the Pumpkin King of Halloween Town, is tired of his job. When he stumbles across a doorway to another holiday land, he comes up with a plan to take over Christmas.

This is a manga version of the Disney film The Nightmare Before Christmas, based on Tim Burton’s children’s story of the same name. It follows the film exactly, even going so far as to reproduce song lyrics and dialogue verbatim.

I enjoyed the stylized manga artwork. The characters had a vibrancy and motion to them.

The story is condensed well, keeping the essentials but not including everything. One scene towards the end was moved to a different place, creating significantly more tension than that scene has in the film.

The opening is quite abrupt, starting with the line about discovering where holidays come from rather than the lead in lines the movie has.

Unfortunately the inclusion of lyrics made some dialogue and narration feel clunky and disjointed. There’s unnecessary repetition in some scenes, while others have phrases that go nowhere. The scene where Lock, Shock, and Barrel discuss plans for kidnapping Sandy Claws goes like this:

“I heard he has razor sharp claws!”
“We’ll kidnap Mr. Sandy Claws!”
“First we’re going to set some bait.”
“I can’t wait to see how scary he is.”
“But you know… Mr. Oogie Boogie Might be even scarier.”

In the film, the bait line in the song is followed by the rest of the plan to use the bait to catch Santa. Here, it’s mentioned but not referred to again, making it feel out of place. The end of the comic has fewer song lyrics, and the storytelling becomes more coherent. Instead of forcing one or two lyric lines into the text and explaining what the missing lyrics would have, the writer was able to simply tell a good story.

Despite my annoyance with the text at times, it is a good physical rendition of the film, for those who love it.
Email ThisBlogThis!Share to TwitterShare to FacebookShare to Pinterest
Posted by Jessica Strider at 12:45