In a few weeks I'll be heading to Peru on vacation.  I've spent the last month or so getting ready - which has included going out and getting a lot of exercise (Pokemon Go's been fantastic for motivating me to take longer and longer walks).

This is why my posting schedule's been later the last little while.  Being outside so much means I haven't had much chance to read, and I've burned through my reserve reviews, so after this Tuesday (I finished a book today) I'll be resorting to shorter things to review to save time while still delivering content.

Once again I thank my husband's family, which had a lot of old, cool stuff.  Specifically, some old comics.  As the photo below shows, there are some Twilight Zone issues, an Outer Limits, Greatest Adventure, Battlestar Galactica 1&2, Space War and a few others.  I'm thinking of reviewing 2 issues per Tuesday post, but we'll see. 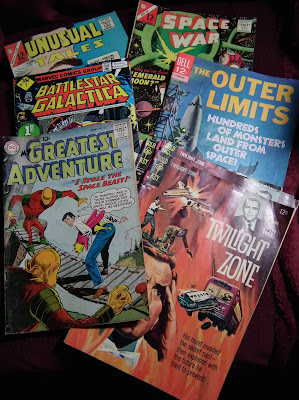 This trip is going to be physically demanding (hence all the exercise in preparation), so I'll likely need a week or two to recover from it.  I expect I'll do some heavy reading and little else the first few weeks I'm back, to rebuild my review buffer.  I haven't fully decided what to do for my Friday posts - I may prep some movie reviews.  I may also have a few blanks as time become short.

I'm hoping to get back to doing more medieval posts in October, but we'll see how things go.  A family project this summer will need to be completed after my trip, which will take a fair amount of time.  Le sigh.
Email ThisBlogThis!Share to TwitterShare to FacebookShare to Pinterest
Posted by Jessica Strider at 10:08