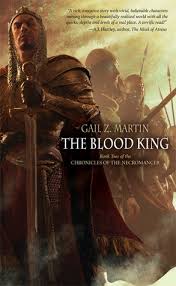 Note: This review contains spoilers for book one, The Summoner, reviewed here.

Tris and his friends have made it to Principality City and gained several powerful allies, but if Tris wants to claim the Margolan throne and right his half-brother’s wrongs, he’ll have to assemble an army and master his summoner abilities.

As with the first book, there’s a good variety to the action: fight scenes, mage training, diplomacy, and a touch of romance.  It keeps things feeling fresh and helps with the quick turning of pages.

The plan for taking back Margolan has an appropriate complexity that relies on more than just Tris and his training.  I appreciated that the efforts of displaced farmers and deserting soldiers helped with the overthrow.

You learn more about the vayash moru (vampires), and how they operate and survive.  I also liked the introduction of new blood magic formed ‘creatures’, though wished they had been given more page time as they’re quite terrifying.

There were some times when the author repeated herself in giving information but it wasn’t as distracting as in the first book.

It’s a great conclusion to Martin’s duology, with a pay off that feels hard earned for the characters.
Email ThisBlogThis!Share to TwitterShare to FacebookShare to Pinterest
Posted by Jessica Strider at 08:08