Book Review: Everyone in Silico by Jim Munroe 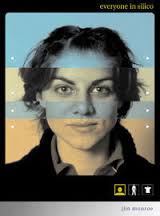 It’s the year 2036 and the world is run by corporations that advertise non-stop and have polluted the planet. More and more people are leaving Vancouver for the virtual reality city of Frisco, manufactured by Self. But not everyone can afford to go, like Doug, who’s age is putting him out of touch in his coolhunting job. And not everyone wants to go, like Nicky, who lucked out and got a lab full of genetics equipment when her school scrapped their program. While others can’t wait to get there, like Eileen’s twelve year old ‘grandson’, who goes without permission, leaving her frantic to find out what’s happened to his body. Because Self is a very private company, a company Paul - who brings these characters together - wants to crack open.

Published in - and extrapolated from - 2002, the world-building is fascinating. While the author gets some things wrong, others are more true today than they were when the book came out. The idea of corporations bringing down governments that hinder their commercial efforts, even if those efforts are meant to protect the populace, is scarily relevant today.

The characters all have goals and complications in their lives. Through their day to day lives they comment on how things have changed, and how some things, like discrimination based on race and class distinctions, stay the same. There are some short but graphic sexual scenes, and not all the pairings are heterosexual.

Most of the book takes place in the real world, though you do get to see Frisco from time to time and more completely towards the end of the book

While I enjoyed how Doug’s story ended, on the whole I found the ending a bit unsatisfying as it left things more open ended than I would have liked.

It was a quick, interesting read that raised some thought-provoking ideas.
Email ThisBlogThis!Share to TwitterShare to FacebookShare to Pinterest
Posted by Jessica Strider at 09:01